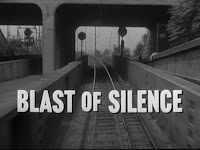 I'm going back and forth with a guy at work about film noir films and I brought this up. Its a super little film that has a great New York feel, which is something I really like and look for in old movies. I love films that were filmed in New York and show it off the way it was.

The plot is simple : A loner hit-man comes to New York City for a job at Christmas and things begin to happen. What happens is the movie.

This is one of the last films made during the heyday of film noir The tale is told in stark black and white images with such a stunning sense of place-it was filmed all over the city-that you actually feel you're pounding the streets and back alleys of Manhattan. The sense of place is gets the film many points in my book.

Adding greatly to the film is the odd second person narration. It shouldn't work. I have no idea why anyone would have thought it would work but it adds so much to the film. It adds a mood that no other film has and fills in details that the visuals lack. Its a perfect marriage of word and image. Its like listening to really good Chandler and Hammett story.

The film was made on the cheap and as such the film itself is not perfect, there are some technical issues with the sound making it seem dubbed at times, the cast is uneven with some characters coming off as stiff as a result, and one or two twists seem more contrived then natural. But for the most part it all works wonderfully. I think this is a great little film.

Trust me you'll like this film since I've recommended it to several people and not one has been disappointed.

The film is currently available from Criterion in a great little package. There is a nifty documentary on the making of the film which adds greatly to later viewings of the film, and there is a short little now and then piece which shows the many locations when they were used in 1960 when the film was shot and in 2008.
Posted by Steve Kopian at February 26, 2010