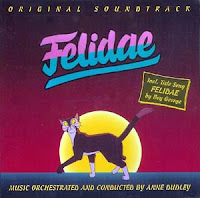 Keep this one away from the kids. This is a decidedly adult animated film that moves the hard boiled detective genre into the realm of cats. If you want a good reason that animation doesn’t have to be for children this is it.

Based on a novel by Akif Princci this is the story of the new cat in town. Moving into a new home with his human our cat quickly finds that all is not well with the neighborhood he lives in. Someone is killing the cats. Worse there appears to be several hyper-sexed female cats wandering around. Add in mad science and religious cults and you have a grand old style murder mystery with a new bend.

I’ve only seen this as an English dub generation or two down the line from the source, so I don’t know how it plays in its original German, but as an English language film I think this film is great. It’s a good solid mystery that really surprises in the directions it takes. It’s very much a throw back to the old Republic B movie mysteries of the 1940’s with an up dating of 1990’s sex and violence. It’s a classic tale of a man, or cat, finding himself in the middle of a situation that is beyond his control, with the only way out of it being to press forward and figure out what is really going on. If you like old style hard boiled mysteries then you’re going to eat this up.

Best of all is the fact that the makers of the film understood that in order to tell this film properly they were going to have to do something other than a straight forward live action film. We never would have bought cats walking around as in recent films like Cats and Dogs or G-Force. This had to be classically animated if this was ever going to work. Of course this would create sales problems in some areas, especially the US where animation until very recently was only viewed as something for kids. In fairness the animation isn’t up to the classic Disney style, but it is serviceable. (certainly its better than most limited animation we see on TV).

This is one that’s worth seeing. Just keep it away from your kids. The violence is bloody, the sex while not graphic isn’t PG rated, and the language is course. This is one for the adults or at least the older kids. As far as I can tell the film is not readily available in the US through regular channels. I picked up my copy from Video Search of Miami and I’ve seen it from other similar sources. I know the film is available in other parts of the world from official sources (Amazon UK has it from e-sellers)
Posted by Steve Kopian at February 22, 2010