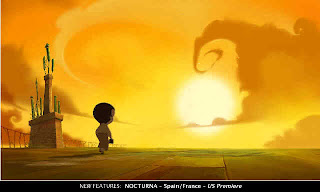 If you want to see films that are not readily available or films that may be the big thing tomorrow one of the best places to go is a film festival. We’ve all heard of the various big name film festivals, The New York, Cannes, Toronto, Montréal, and of course Sundance. These are the places that many films use as launching pads for many of the big films of tomorrow. They are also a great place to see films that you won’t see anywhere else. They are in general a treasure trove of hidden treasures.

I’m going to start with a festival that starts here in New York , The New York International Children’s Film Festival. This is, in humble opinion, the best programmed festival that I’ve run across. The festival quite simply has a knack for not programming bad films. I’ve been attending the festival for several years and I have to say that I haven’t attended a bad film, and while I have run across films that they programmed after the fact that didn’t thrill me, I don’t think I’ve run across a film that really made me truly wonder what they were thinking. (I think the ones I haven’t liked were more a matter of taste. For example two films from this year Fantastic Planet and The King and The Mockingbird are two well loved films that I find visually wonderful, but dramatically dull.)

Generally the festival has run on weekends late February and through March, which makes it a nice way to ease into the spring like weather. There was one year where the festival ran for a whole year on select weekends at the IFC Center in Manhattan and this was a nice segue into what they do now, which is run several films a month at a variety of locations (the IFC Center and Symphony Space) all through the year.

The people behind the festival have moved on from showing films to releasing them as well. They has a hand in the release of Azur and Asmar: The Princes' Quest in the US; they arranged numerous screenings of Nina Paley’s Sita Sings the Blues and right now they are the US distributor of the Oscar nominated Secret of the Kells. They also will arrange screenings of various films for schools and organizations.

I won’t go into a full list of films they have screened since I think a list of films can be found at their website, however I do want to say that I will be posting reviews of some of the gems that I’ve seen at prior festivals over the course of the next few weeks ( Nocturna, The Girl Who Lept Through Time, Help I’m A Fish, Porco Rosso, Yobi the Nine Tailed Fox, Summer Days with Coo, Tree of Palme, among others.) What I do want to talk about is the neat things they do and find.

One of the thing that I love is that the festival is trying to do more than just show films. They run workshops for kids to get them involved with film. Its hands on film production showing the kids that they can do films of their own. One workshop is running in conjunction with this years festival. They are also running a seminar on ventriloquism that will have Tony award winner Jay Johnston appearing to teach and talk with the kids. I hate that I’m too old for their workshops because they look great, and since they tend to fill up really fast I’m guessing many parents feel the same way.

The festival has also managed over the course of its life to bring films to the US that might have been locked away forever in their home country. This year for example they are running what they say is the only English subtitled print of Gwen and the Book of Sand. This is a very beautiful, breathtakingly animated story of a girl in a world after the fall of mankind. Gwen and her people are living in a desert trying to survive. I’ve seen some of the film on an unsubtitled French DVD and it really impressed me. I’m going to see the film when it screens later in the festival because I want to know what its all about.

The festival has managed to form solid bonds with many of the worlds best filmmakers. They regularly show many of the films of Hayao Miyazaki and Studio Ghibli. Frequently manage to show films that most people have never seen. A few years ago they scored a huge coup when they brought to the US several Miyazaki short films that were only to be screened at the Ghibili museum. I was lucky enough to attend the screenings and I honestly think that these short films are some of the most magical ones that the master animator ever made.

And speaking of short films….

One of the places the festival shines is in their short programs. They usually have at least for six programs of just short films and they are a fantastic selection. Not only do they do at least two general shorts programs, they also do one geared for “tots”, one for young women, and one of scary films. This year they’ve added one for teens and they are also show casing one animated shorts from France . It’s an amazing selection of films and the collection is so good one wishes that they would put the selections out as DVDs because there is nary a bad one in the lot. The really tough thing about them is they seem to have such a good reputation that that they are usually the ones that seem to sell out the fastest. If you want to see what I mean look at the schedule and you’ll see that this year they seem to have added a couple extra screening of the general short and tot collections (In years past it always seemed to be two or three showings). If you want to see good films you won’t see anywhere else you need to see these collections. (I’m kind of bummed that I can’t make any of the screenings because of scheduling conflicts)

The single draw back to the festival this year is that it’s become so big that its now spread out all over New York . It’s in five different locations and they are all over Manhattan Even the three closest are a good distance from each other and they aren’t conducive to getting from one place to another in a short amount of time. This is really going to drive people crazy if they are going to or from Symphony Space which is 90 blocks (on a different subway line) from the next closest place The Cantor Film Center on 8th street . (If you’re going you have to think about what you’re seeing and where the screenings are)

I know people are going to say that I’m being a suck up, but I’m not really, this is the best programmed of the films that I’ve attended. I’ve been thinking about the various Festivals I’ve attended and I find that the collection of the films they put together simply have more winners then losers. It’s a great little festival that has rapidly become a place for film lovers of all ages, not just for kids.

If you can try and go. The Festival starts this Friday and then runs Saturdays and Sundays through March 21st. Details can be found at the link in the side bar or above. Be warned several of the screenings have sold out so if there is something you want to see get tickets now.

Email ThisBlogThis!Share to TwitterShare to FacebookShare to Pinterest
Labels: nyicff