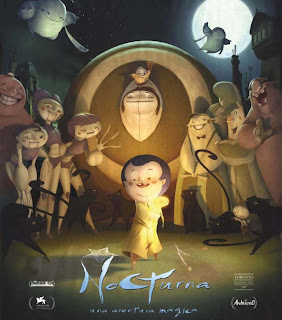 This is the story of Tim. He's a little boy who lives in an orphanage but doesn't get along with the other kids there. He is very afaraid of the dark and has to pull his bed by the window each night so that he can be watched over by "his star". One night while looking out over the city he notices that the stars, including his star, are going out and he rushes up to the roof of the orphanage to see what is happening. There he meets the Cat Shepherd. The Cat Shepherd is in charge of the cats that go out at night and put all of the children to sleep. When Tim refuses to go to sleep' he wants to try and find out what is darkening the stars, the Cat Shepherd is forced to take Tim to the head of Nocturna, the night world, in the hope that he can help find out what is behind the darkness.

This is simply put one of the most magical films I've ever seen. It perfectly explains what is going on in the world when we are all asleep. If you wanted to know why you're hair is messed up, or who makes the weird noises in the dark, or why you're socks go missing, its all explained here. There are several wonderful set pieces with extrememly clever dialog and verbal puns that play on differing levels. The film is also a grand adventure as Tim is forced to travel across the city in order to stop the Darkness from wiping out everything. In typical, but not preachy, fashion Tim also grows up. Its so nice not to have the moral beaten into out heads.

In many ways the film will remind you of things like Monsters Inc, Moon Girl, Spirited Away and a few others. But the connections to other films will be fleeting as this film creates its own marvelous world of its own. I've seen the film upwards of ten times now and each time I do any notion of the film being a copy of any other film becomes less and less. Nocturna is a film and a place that is uniquely its own (one need only look at the design to see that). As I've said elsewhere the odd flashes of recognition actually work to make the film better because in a weird way it makes it all more real.

One of the joys of the film is that it plays to both kids and adults. I've shared this film with some people where I work so they could show it to their kids. In every case where I did so this turned out to one of those films that both the parents and the kids could watch and enjoy repeatedly.

The repeat viewings is one of the reason that I love this film so much. Adria Garcia and Victor Maldonado who wrote and directed the film did something wonderful with this film, they made a film that gets better with each viewing. Here is a film that grows as you see it each time. What you learn at the end effects the beginning on the next viewing. Characters that you barely notice in the background at the start of the film, are seen in the fore front later on so that when you watch the film over and over again you notice how neatly the film is all tired together. Its all throw away stuff but it adds weight to the proceedings.

I love this film a great deal. It is easily in the top something or other of my favorite films of all time. Certainly its one of the few recent films of any stripe that I have happily sat down to watch more than once. (And no I don't think it's perfect, the denouncement of that the Darkness is is weak, but I don't care because the rest of this film is so wonderful)

If you love great adventure or animation or just great movies you have to try and find this film. It is an absolute shape that this film does not, to the best of knowledge, have a US distributor.(This is the one Unseen Film that I am constantly asked by parents if there is going to come out on DVD so they can pick up copies for friends)

I was supposed to see this at the New York Children's Film Festival (NYICFF) in 2008 but I missed the screening. Because I loved the trailer I decided to try and find the film on DVD and I ended up getting the Region 2 Spanish DVD from an Amazon e-seller. If your DVD player can play Region 2 discs I recommend that you try and pick up a copy. The disc not only has the film in its original Spanish language with English subtitles but it also has a fantastic English vocal track that I like even more.

The mention of the NYICFF above allows me to plug the film festival and say something extremely important about it.

The NYICFF is a great film festival. The one for 2010 starts next week and a link can befound in the link section of this blog. It's a showcase for films from all over the world and while they call themselves a Children's Film Festival the films are simply great for everyone. The parent organization, Gkids, runs films all year long at various theaters in New York and the surrounding areas and they have moved on to film distribution with this years Oscar nominee, Secret of the Kells (a review will follow) and other films like Sita Sings the Blues.

The most important thing about the film festival is that the films don't "suck". Yes, I know thats a tad base but at the same time it states clearly that the films they choose tend to good across the board. To be certain the films will vary with your own interest, but for the most part I've never really seen a bad film at the festival. Having been to any number of different film festivals over the year the fact that I haven't run into any truly bad films is unheard of.
Posted by Steve Kopian at February 20, 2010