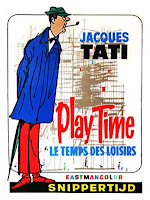 Play Time is an odd film in that the joys of the film aren’t apparent on the first viewing. It is a film that requires multiple viewings in order to get maximum laughs out of it. This need for multiple viewings is I’m certain what killed the film when it was first released.

Play Time was Tati’s long-in-gestation follow up to Mon Oncle, which won an Oscar for best foreign film. During the almost ten years between films Tati worked on several scripts and did a stage show. Eventually he settled on a story about modern life and proceeded to spend a fortune building a mock-up of parts of Paris in an empty lot. The reason he did this was so that he could rotate the sets to follow the sun. He could also move the buildings around to suit his needs. The set, which by all accounts was amazing to see, was called Tati-ville. Tati was clearly working on something extraordinary and in interviews he talked about trying to create a new form of entertainment.

In fairness to the story behind the film, which fills up large portions of the two biographies that I’ve read of Tati, I’m going to say that you need to find a full account of what happened and read that*. It’s a story that needs to be made into a movie.

After years of shooting and post production, and with his fortune and that of his investors sunk into the film, Tati premiered his two and a half hour long film to thunderous silence. No one knew what to make of it. Tati in desperation began to cut the film in the theater AS THE FILM RAN in a desperate hope to make the film palatable to audiences. Nothing worked and the film sank him financially. Only two feature films followed; one, Trafic, was dismissed by many people (I love it), and the other, Parade, is an odd film version of a variety show.

The plot of the film doesn’t really exist. It's roughly 24 hours in Paris as marked by the arrival and departure of tourists. Along the way various characters, including Tati’s Mr. Hulot, come and go as we see the madness of everyday life. We watch people do what they do in the city, streets, offices, and restaurants. It's more or less a series of set pieces that kind of connect to each other.

The scenes actually connect in ways that we don’t expect and which isn’t always apparent, which is why the film needs to be seen multiple times, and preferably on a big screen. You see the trouble, or joy (depending on your point of view), is that the film isn’t about what's going on in front of you, it's about what's going on in the background. It’s the stuff going on behind what we think is the focus of the film that’s the REAL focus point. Characters come and go, often on the edges of the screen, and what THEY are doing makes up the really funny bits. Characters that have been in the fringes suddenly become the focus (or vice versa), with payoffs in jokes that won't mean much if you didn't see the earlier bit. You have to watch the film several times simply because you can’t catch it all the first or second time thru.

When I saw it the first time I didn’t like it (the score I gave the film at IMDB is a 6). However I was warned that I would have to watch it multiple times...and you know what, the more I see it, the funnier I find it. Each time through I see new things and make new connections. Jokes that should have been plain the first time (that I missed), are caught the third or fourth time thru.

It’s a film you have to work with and develop a relationship with, but if you can do that, it's hysterically funny.

Unfortunately the film has one key problem (beyond not playing to expectations), and that is it's very cold and calculating. Yes, it's funny, but it's so much a reflection of modern life that it's almost TOO impersonal. That is Tati’s point, that life is impersonal. He also doesn't have one person the star because he wants to make it clear that we are ALL these people. To hit the point home his Hulot character has several doppelgangers running about. While it's not as cold and impersonal as Mon Oncle, a film I don't like because it's not as warm as Trafic, Play Time is the most human and humane of all of the Hulot films, with the result its still an off-putting film, even after you’ve warmed to its humor.

Ever film lover needs to try this film at least once, if possible twice...and really if possible on a big scree). It's so different than what we think of as screen comedy that there is something special about it. And it's damn funny.

The film is currently out on DVD from Criterion but it's going out of print because the contract with Canal has expired. The film will be released by Lions Gate, but the double disc Criterion DVD is the one you want (more so than the BFI edition because it has additional material not on the BFI edition)

(*- The link is to the Wikipedia article on the film which talks briefly about the making of the film.)
Posted by Steve Kopian at September 23, 2010