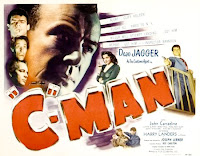 This is another one of the films that came out of my recent talks with an office buddy about good film noir. Actually the talk was more along the lines of good film noir that not everyone has seen. That's the problem, there are the major studio releases, say Out of the Past and then there are the B's like Detour. What, my friend wondered are other good lesser known noirs? The idea was he wanted to impress his girl friend who loves moody crime dramas.

This is one of those great lost noirs, of it not great good enough to make you wonder why its not well known.

Dean Jagger plays a US customs agent who hunts the murderer of a childhood friend, and fellow customs agent, who was killed while on the trail of a stolen necklace. Jagger is a no nonsense guy, and even though the bosses don't think he should be on the case, he's way too close, they let him go because they know he'll be hip deep in it anyway.

Where did this movie hide for so long? Set and shot primarily in New York City this is a gritty crime drama that predates many other better known films that were told in a similar fashion, say Naked City or any of the other almost documentary like you are there films. Its raw and in your face with the edge of real streets and real places. It's plainly obvious that there aren't any sets as such. The style reminded me of the films of Orson Welles, especially a film like Mr Arkadin. It also feels like the Lemmy Caution films of Eddie Constantine and other low budget European films. There is an pointedness to the film making, a do what it takes attitude that produces some surprising and some violent scenes. This is not the type of film you'd expect from an American studio, certainly not in 1949.

Yes this is one of those movies that seems a bit hokey at first, but give it time and I think by the time ten minutes have passed you're hooked and will be willing to follow the story where ever it goes just because its a good story being told in an interesting manner.

I don't know why this movie isn't better known. Certainly its not a great movie, its has some flaws from its budget and some uneven writing but when the day is done its still a damn good flick. It reminded me of the sort of movie you'd catch at 2am on the Late Late Show when you're half awake, trying to fall asleep only to fall in its clutches and stay up all night... I think I would have thought this was even better if I saw this at 2am.

This is one to see and search out. Actually one doesn't have to go that far. This is readily available on home video. Alpha Video has a low budget version that should set you back about five dollars and I think VCI or another distributor has copies out if you want to pay a little more. (Then again there is always Netflix)