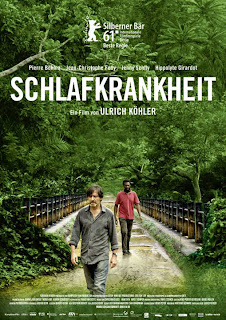 Disappointing film about Ebbo, a doctor in Cameroon. He and his wife have been in the country for many years treating the locals, particularly a local outbreak of sleeping sickness. However time is running down and Ebbo and his wife are going to be heading back to Germany where their daughter is in school. However as time winds down Ebbo is having second second thoughts about leaving.

Three years later Ebbo is still there, though his wife and daughter are still in Germany. This second half of the film is more focused on a French doctor of African descent who has been sent into the bush to assess Ebbo's work on combating the title disease.

This is a just okay little film. Despite some great performances, particularly Pierre Bokman as Ebbo, the film never really amounts to much. The trouble comes from the films construction, which switches tracks just as things are getting interesting.

The first part of the film, where Ebbo and his wife plan to leave and struggle with it's implications, seems at first to be going over well worn ground. We've seen these Europeans in Africa stories before and it's not until late in the first half, as Ebbo breaks down and begins to realize he really can't go home that the film gains traction.

Sadly the film then suddenly jumps three years ahead and we're in France watching a young doctor making the choice to give things up and go to Africa and do something important. Again the film begins to hit all of our cliched notions of a fish out of water (intensified by the idea of it being a black European). The film then begins to gain traction as he at last connects with Ebbo who has now clearly been too long in the bush. As the film begins to once more to spring to life the film then again switches tracks but instead of staying on some course it goes off the rails as the film careens to a close with a night time hunting sequence. What happens is not what you think, the film has suddenly become an exercise in magical realism and it wrecks the film. My attitude was you must be joking...apparently not.

Its not a bad film, but I can't see actually going out of my way to see it. Its a film that goes over familiar thematic territory even as it's charting new places visually. This is more the sort of film I wouldn't have minded stumbling across had I found it on cable or Netflix, but it isn't something I'd have been happy to have made a special trip to see in a theater.
Posted by Steve Kopian at October 04, 2011