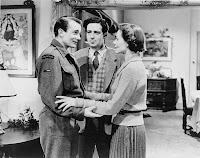 Until a few years ago I had never heard of this little gem of British holiday sentiment. I was having a discussion of holiday films that most people don't usually see when I heard someone call it the "Christmas movie for people who don't like Christmas movies" and the quest to find it was on. I eventually tracked it down through Video Search of Miami, though its now on DVD elsewhere in the world, but not in the US which is real shame.

This is the story of a Christmas in which the emotionally wounded family of a Church of England clergyman come home and attempt to have a happy holiday. What happens is not your typical happy tearjerker, nor is it a Christmas nightmare. Basically everyone comes home to Ralph Richardson's home. Secrets are reveals and misunderstandings stated and somewhat cleared up. Best of all it's reasonably realistic, as much as films of the time could be in 75 minutes, for example the ending while hopeful is far from certain, so much so that I cursed the fact that it didn't go on another five or six hours, my sole complaint about the film.

This is a film to see and treasure not only during the Christmas season but all year long.

A word of warning, don't abandon the film until you get to the end. I wasn't enraptured of the film for almost two thirds of its running time. I was interested in what was happening but I didn't know if I liked it, and then suddenly, all of the pieces were in place and it became this charming atypical jewel of a movie.

Forget Its a Wonderful Life, watch this instead, its so much more real.
Posted by Steve Kopian at April 07, 2010