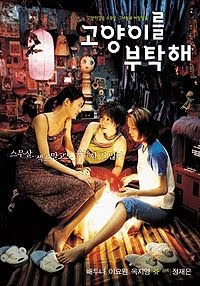 In the early months of 2003, I had found my first post-college job and had moved out of my childhood home. I was suddenly out on my own, dependent on myself. With this freedom also came some fear -- I had to make it all up as I went along.

I know my experience was not unique. But it was in those days I first saw the Korean film Take Care of My Cat. It resonated deeply with me at the time and it still does.

In the years since then, much as been made of the The Bechdel Test (although comic creator Alison Bechdel will tell you that the credit goes to her friend for the concept). The test is this: A movie has to have at least two women in it. Those women must talk to each other. And they must talk to each other about something other than a man. It may or may not be a concept that you agree with, but it's an interesting way to judge movies.

The movie follows five friends a year after they've graduated from high school. Haejoo (Yu-won Lee) is an ambitious office girl. Taehee (Bae Doo Na) dreams of escaping her overbearing family. Jiyoung (Ji-young Ok) struggles to reconcile her poverty with her desire to go to art school. Twins Biryu and Ohnjo (real-life twins Eung-sil Lee and Eung-ju Lee) mostly provide comic relief but try to find where they fit in as half-Chinese and half-Korean. The five friends struggle to stay close and stay in touch as they embark on their own lives. (I would like to note that I am using the spelling on the names that are in the subtitles of the DVD I have, which is the special edition from Korea; I understand they may be different on the U.S. release from Kino.)

These are problems that just about anyone coming of age has to cope with. Even though she desperately wants to be seen as glamorous and grown-up as she flirts with the men in her office, Haejoo comes to learn that clothes and status ultimately don't mean much. While some melodrama in the third act would derail just about any other movie, writer/director Jae-eun Jeong handles it with such grace that it works beautifully and reinforces the theme of the movie perfectly. It allows Jiyoung and Taehee to find each other and their escape.

One of the most striking things about this movie is the way it integrates technology. While it was made 10 years ago, the girls are constantly calling each other on their cell phones and sending each other text messages. (The content of the text messages appears onscreen in bus windows, on the sides of buildings -- it's surprising and effective.) But the more ways the girls have to keep in touch, the more separated they are. It's an obvious message, but the characters' isolation from each other is still communicated with subtly.

Since first watching it seven years ago, I've made everyone I know see it and I'm still constantly recommending it. It's still a wonderful glimpse into a period of young women's lives that is too often overlooked.
Posted by Eden at April 26, 2010