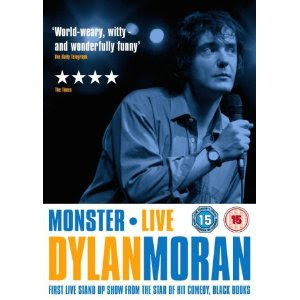 As you know I'm off at the New York Asian Film Festival so I've turned Unseen Films over to Ken Fries, who apparently has sold the blog back to the British. What can I say, I thought he was a friend. I just hope he got a good price for it.

Anyway in order to help me out Ken has programmed a week's worth of comedy from overseas. These are all performances by some really funny gentlemen who you may have seen acting in movies and on TV. These are all performances that are not available in the US, so unless you live in say New York or Chicago or Boston, or travel overseas, you may not have had the chance to experience these guys either live or on DVD. First up is one of the funniest comedians working today, Dylan Moran.


At the beginning of Dylan Moran's Monster DVD, there is footage of an "interview" being shot in his dressing room. Before the "interview" starts, he asks, off camera, "Why do people buy DVD's? Don't they have lives?" Well, yes, but we prefer they be enriched by the witty social commentary of someone such as...well, Dylan Moran.

Moran comes across as a regular guy at a party that is holding court. Since he's holding a microphone in one hand, he has to alternate between holding his glass of wine or a cigarette in the other, but he'd be holding both at the same time at the party sans microphone. One of his better lines in the early part of the program is "Your potential is like your bank balance...it's always a lot less than you think it is." But much of his material doesn't come across as...material. His delivery is so seemingly random and natural that it feels like he's just talking to you at that party, making all of this stuff up as the conversation goes along.

He spends the first half of the show tackling the subjects of drinking, children, and the generational gap. He makes keen observations on each, and peppers them with oftentimes bizarre analogies that come so out of left field that he does seem to have just said the first thing he thought of at that moment. It is probably scripted, but again, his delivery and demeanor are so relaxed that it comes across as completely natural, and it makes you really want to hear what he has to say next. It doesn't hurt that the Irishman is just a few months younger than I, so I can completely relate to many of his cultural and psychological references.

The topics attacked after the interval include politics and religion, and don't ask how, but somehow he logically gets to a wonderful portrayal of a French couple shouting at each other in their house in between the aforementioned subjects. It's probably the only moment in the show where he maintains a character for more than just a moment, and it's a bit of a shame, because he does it very well. But as funny as everything has been up until now, it isn't until the topic of conversation turns to men and women that Moran really hits full stride. While the comments on life have been astute up until now, they border on genius in this section...particularly his claim that men are more romantic creatures than women.

The nearly 90 minute show, filmed in Dublin, is well worth getting the DVD for, despite what Moran says about people who do.

DB adds a comment:
There is an "hour" long version of this show that was done for BBC AMERICA floating around out there. It is to be avoided at all costs. Randi, Reg and myself attended the taping, which was a very abbrievated version of the show (it seeemed like a collection of punchlines). The performance, and I use the term loosely, was further chopped down for broadcast by the inclusion of commercials and Moran talking to people in a park not far from the theater where it was filmed. We left the venue wondering what it was that people loved about Moran's stand up, and it wasn't until we saw Monster that we truly became fans.