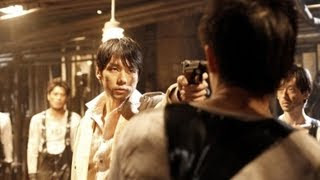 Sabu's brilliant screen version of a 1929 proletariat novel concerns the oppressed crew of a crab canning ship. Forced to work in brutal conditions they dream of escape. When one of their number decides to commit suicide the others decide to join him figuring the next life has to better than this one. It goes wrong and the crew is forced to endure more punishment until a combination of Buddhist teaching and a stay on a Russian cargo ship set things in a different direction.

I'm a fan of Sabu. I like that his films take things that we think we know and turn them just enough that we are forced to see things differently. I like that he takes chances, what else do you call a scene that is suppose to be a mass suicide that turns into black comedy as the motion of the ship makes death not an option.(actually suicide, as is any form of escape, is thwarted repeatedly through the film). I like that he assumes that his audience is adult and will be willing to work with him. Things are laid out and while the plot moves along its up to the audience to connect the larger dots and to make the film take on a larger significance.

For most of the film we see only the hell of the canning floor. There is no outside would. If there is anything else it's a fleeting view, more often night or fog obscures the view. It's a hell that approximates the hellish world of Fritz Lang's Metropolis. There is talk of heaven and hell and notions of hell being with in us and where do we choose to live. Are we doomed to live in that hell or can we escape? The answer isn't clear, though there is hope. Sabu is asking us to consider our jobs, our lives and our existences, should we wait for the next life or do we seize the day? I really like this film. Its not necessarily a warm and fuzzy movie, but it will make you feel good, especially if you allow the film to do what its going to do. It's a mannered film at time. Its emotional cold at times and yet I was touched. There is a kindness and a life to it.

Forgive me the film is hard to describe. As with most Sabu films its easy to tell you the plot, but not always to tell you how they operate or how they make you feel. I know that grates on some people. Films for many people have to be a certain way and if they aren't they can't really process them. I like Asian films because they often take you out of the comfort zone. Sabu's film will take you outside of that comfort zone even more. Its not a David Lynch sort of thing, rather its simply an opening up of ones eyes to seeing things in a completely new way. It strikes some as cold and manipulative, and on some level it is, but at the same time it forces one to consider things in ways we haven't before.

Not long after seeing the film I decided thatt this was one of the best films of 2009. Yes it's more a film of the head then the heart, but in making me think, by challenging me to do more than just sit there the film has engaged on so many more levels than most films ever have. When it was over I felt moved, not just emotional but on other levels as well.

If you want to be challenged and to be more than a passive reactor, see this film, it will change the way you think.

Currently out on import DVD
Posted by Steve Kopian at June 27, 2010