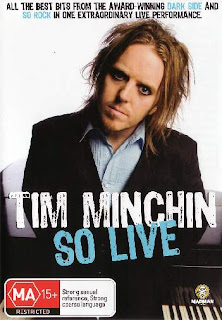 Aside from the fact that Tim Minchin is a brilliantly gifted lyricist who writes & performs wonderful comedic songs, the biggest key to the success of his material can be summed up in one word...timing. His timing, both comedically and musically, is perfect. He has an uncanny ability to know precisely how long to pause for effect, to know just how many words he can squeeze into a line and still keep the rhythmn of the song, and to know just how long that piano solo should be.

Minchin (an Australian living in London), relies on visual effects for much of his comedy as well. By visual effects, I mean mascara. He wears a large amount of thick eyeliner to accentuate his facial expressions, which is key to the success of his comedy. When you are WATCHING a Tim Minchin performance, you will get much more out of it than just listening to it. That is something you could find yourself doing, as it is music and comedy combined, 2 forms of expression that don't HAVE to have visuals to be successful. You will still find Minchin enjoyable if you do wander around the room doing things while the performance plays, and you'll find yourself singing parts of songs long after the DVD has ended. The chorus to the opening number, "So Fucking Rock", is insanely catchy. But if you pay attention, you'll be rewarded by some great facial expressions that fill some of the on-purpose gaps in the music. And, in reference to the opening number again, a great deal of mime is involved as well, so you'd BETTER be watching, dammit!

Minchin is very funny when singing songs at the piano, but he is capable of being just as funny when standing naked (as in sans piano) center stage and performing, not merely reciting, a poem entitled "Angry (Feet)". His skills as an actor shine thru beautifully in this piece, as well as being a showcase yet again for his impeccable sense of timing. But the bulk of the show, and his true strength, lies when he plays the part of demented cocktail lounge piano player, belting out tunes such as "Inflatable You", "Rock N Roll Nerd", and his self-professed favorite song to perform, "Peace Anthem For Palestine". It is a treat to watch him play piano as well, as he does seem to be remarkably talented on that instrument. And when you take into account the sheer volume of lyrics some of his songs contain, his talent seems to grow exponentially. The first lines alone of "Some People Have It Worse Than I" are, "Well I wake up in the morning at 11:47 and I can't believe I have to face the horror of another fucking day. And the magnificent magnitude of my morning erection merely mocks me like the sun in its optimistic greeting of the day." You try singing that, let alone playing piano as well...

This particular release was an Australian only DVD entitled "So Live" that came out in 2007. It contains most of the better songs and bits from his first 2 shows, "Darkside" and "So Rock", which were released as CD's only. 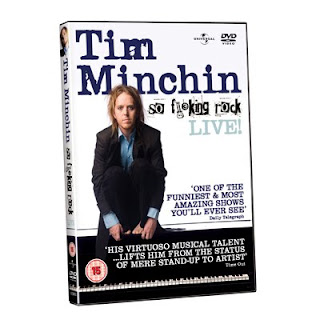 As brilliant and funny and witty and revealing as it is, a slightly more polished version of basically the same show was released in the UK the following year entitled "So Fucking Rock Live". There's really no point to owning both, it's just a matter of which is easier to hunt down. Personally, I would recommend "So Fucking Rock Live", as the little changes do make a difference. It is interesting to compare the 2 to see where Minchin felt things needed improvement, and I find it compelling to see a professional hone his skills and work at his craft, but being a student of comedy I WOULD find that interesting. The rest of you, who just want to enjoy the show, can pick up either version and be quite happy.
Posted by Ken Fries at June 29, 2010