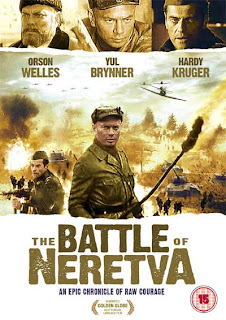 This is one of the films that I learned about from the documentary Cinema Komunisto about the Yugoslavian film industry, which screened at last years Tribeca Film Festival.

It's an epic retelling of the final battle for Yugoslavia where the partisans counter attacked against German, Italian and Chetnik forces.

It's old school epic film making with huge crowds of actors and real tanks and explosions without any computer enhancement. It also has an international cast that includes Orson Welles, Yul Brenner, Hardy Kruger, Curt Jergans, Franco Nero, Sergei Bondarchuck, and Anthony Dawson. Its a film that could only have been made in a country like Yugoslavia where it's leader loved movies.

Sadly because of the lack of watchdog for Yugoslavian films (no one really cares about them now that the country has been split up) this film is very difficult to find in anyhing resembling it's complete form. The full version runs about 175 minutes (according to IMDB) but it's near impossible tofind. Only recently did a 160 minute version become available as an import from the UK, but it's in a print that has burned in subtitles and is wildly uneven in picture quality. The upside is that its has a reasonable price if you have a regionless DVD player. (There is a supposedly better version available I think from Germany, however any copy of that film I've run across is a relative small fortune.)

Truthfully most versions I've run across, run much shorter than even the 160 minutes. Indeed the first version I picked up was an Hungarian import that lists as the full film but in actuality runs 100 minutes, thus cutting out over an hour (Its starts what would be 13 minutes into the "complete" version I now have). The one advantage is that it has an English dub track. There is now a US release, which is available from Amazon on demand but it's only 105 or so minutes long, which is still a good 70 minutes short of the full run time.

Somehow this film was nominated for both the Oscar and Golden Globe for Best Foreign film losing out to Costa Gavras' wonderful Z. I say somehow, not because it's a bad film, rather because it's a very un-Oscar like film.

In the 160 minute version this is a very long (probably over long) epic battle film which alternates action with propaganda, though not so much propaganda as to be truly annoying. The film follows several characters on all sides of the battle as they plan the attack and then try to counter the enemy moves. One of the high points is the part where they actually blew up a bridge for the film (though the smoke from the explosion obscured things and it had to be done in part, in miniature). Its just men and women in battle and little else...

...which makes for a very tiring film. A half an hour in I was exhausted. So much is going on, the constant fighting, the constant motion and dozens of characters was taking its toll. While I was enjoying what I was seeing, I was feeling like I was being over whelmed.

Don't get me wrong this is a truly spectacular, truly one of a kind film (the most expensive ever produced in Yugoslavia) but it's also a kind of an endurance test. You have to really like war films to make it through this film in one sitting, which fortunately I do.

If on the other hand you don't like war films or need a long movie to take a breather stay away.

If you can't get the full or almost full version do try the shorter version, just be aware that you're missing well over an hour of material. While not ideal it will give you a sense of the scope of the film.
Posted by Steve Kopian at January 13, 2012