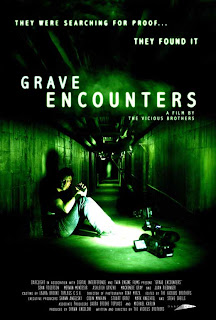 Oh thank god the embargo is over and at last I can tell you about one of the best films of the year and one of the best horror films in ages. It's a wonderful little film that is far from perfect but is the sort of thing that will just kick you to the curb. When the film ended everyone at the screening I attended was just staring at the screen not moving. I mean no one, no one moved until the end credits had finished. I say this because more times then not at press screenings people are bolting to the door or at least shifting in their chairs, here no one moved.

Okay, I'm getting ahead of myself, let me start over.

The premise of the film is that what we are seeing is the 6th and final episode of a ghost hunting reality series called Grave Encounters. It's a condensed version of the footage that was found after what ever happened to the host and crew of the series. They left behind some 76 hours of raw footage which was then condensed down into the the hour and a half movie we're seeing. It's never specified what exactly happened beyond the footage was found

After the introduction the film shifts gears and we start to actually see the footage the crew shot. We watch as the crew arrive at the now closed Collingwood Psychiatric Hospital. We watch as they talk about what they are going to do, get some establishing shots and do some preliminary interviews. Then, as is the premise of the show, the cast and crew are locked into the hospital and get ready to spend the night looking for ghosts, or at least trying to find enough footage for an episode of the TV show.

It's no secret to say things go from dull to "oh crap" in short order.

I didn't think I was going to like this film. I was kind of expecting to see yet another found footage film that thought it was way more clever than it actually was. I figured there would be some cool images and a few laughs and maybe a cheap jump or two. I didn't expect to walk out of the film wondering what the hell I just saw and wondering why this film made me feel so terribly uneasy. (The rave "one of the best films of the year" was not in the game plan going in.)

Looking over my notes for the film I find the first two things I wrote about the film was "If the zooming doesn't stop I'm going to kill some one" which was followed by "if this keeps up this is going to forever take the piss out of similar shows". from there the notes show a progression in enjoyment in the film. It's a progression that matches the careful manipulation by the directors the Vicious Brothers of the audience.

If you break the film down you realize how perfectly paced and how wonderfully controlled it is.

The film starts out with the producer setting everything up. And you buy it but know it's all set up.

From there we get the bad zooming of the "home movies" which makes you think that the directors have no clue as to what they are doing. Your guard is knocked down. It stays down as the film send up the Ghost Hunter TV series with a razor like precision. We watch as the crew shifts from knowing about the silliness of it all in the behind the scenes footage, and how they sell the scariness on camera even to the point of paying someone to say what they need to make a good show. It's funny in a knowing sort of away.

It's a trick, the film is drawing us in and it's convincing us that this is just going to be a fun little film. This is reinforced when we see the crew starting to film and making jokes as they go,we know it's going to turn bad, but we know it'll be more fun then scary.

And then the film begins to turn on us. the humor begins to go and the film really gets creepy by degrees (and that annoying amateurish zooming that started the film is gone, replaced by carefully chosen shots and compositions, done so stealthily we never noticed).

By the time the crew thinks they're safe we are in the hands of the Vicious Brothers and they are just beginning to work us over. I won't say more than that.

If this films clicks with you it will rock your world.

The question is will this film click with you?

I can't answer that. I can explain where the turning point in the film was for most people in the audience at the screening I attended.

There is a point in the film where a great deal of weird stuff has gone on. Real creepy low level stuff that makes you skin crawl and which push the once jokey crew to the edge. They want out, but they've been locked in. As time for them arrives they find that their relief hasn't arrived. Unable and unwilling to take any more they try and break out. The door get the doors open, but they find that the way in isn't the way out any more. From this point on the film becomes a futile attempt for them to get out as the hospital effectively rearranges itself.

(I know that sounds like a spoiler, but the official synopsis in the press materials and on line effectively tells you that).

Whether you like or love Grave Encounters will depend on how you take the plot twist at that point. It's not that what follows is bad, it's not it's just that the film becomes this march to the end as bad things really begin to happen.

For me the turn didn't bother me. I kind of suspected it was going to happen based on what I had read, but it didn't matter since the Brother Vicious had been doing some things I expected and just kept turning them on their ears to screw with our heads. I was willing to go anywhere with them. For some of the people around me they found the unending walking a bit tedious even if the punctuation of events with scares messed with their heads. (One women in front of me sat for the whole second half of the film with a scarf in front of her face not wanting to see what happened next.)

I have to applaud the directors for making a film that doesn't rely on gore and blood. Yes there are truly special effects, but for the the most part it's not body parts and organs flying around.

I have to also applaud them for not explaining everything. As the film goes on we see things but we don't get explanations. To be certain part of it is the result of the events not being explainable,but it's also the result of there seeming not being enough footage to fill in. (And bravo for not cheating and have the cameras crap out at every instance)

I'm not going to lie and say this is a perfect film, it's not. I can wax poetic about this film all day long- and trust me I have been talking this film up for the last three weeks since I saw this for the first time- but I know the film is flawed. There are a few moments where things don't play out perfect, where things seem the wrong sort of silly or there is a lapse of logic (For example the batteries' long life- which I know can be explained away as the hospital bending reality, but still it sits oddly with me.)

When the film ended the people running the screening asked what I thought of it and I said I loved it. They asked if I would want to see it again, and I said I did...

...but truth be told I don't know if I ever want to feel what I felt during the first screening of the film. I don't know when it was the last time I felt this uneasy in a horror film of this sort: creepy, scared, dreading what might happen next. The mere fact that I could feel this knot of tension moving up my back during the film is what makes me love the film so much. I know it's the physical sensation of dread that trumps any flaws the film might have and pushes it into the realm of a truly great film. Frankly, any film that can provoke that strong a reaction gets bonus points.

Despite there being more to say (I haven't mentioned the wonderful cast, who sell every moment) I'm going to leave it there. You need to just see and experience the movie for yourself.

There is no question this film is recommended. It's supposed to to be currently on Tribeca VOD on cable but I haven't checked my cable provider yet and it's getting a limited theatrical run this summer.

While you may not love it I think you'll like it.
Posted by Steve Kopian at April 22, 2011