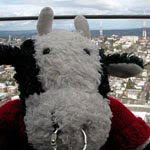 Yesterday's post for the first Paul Temple film was also the first post for a little stuffed bull named Bully.

I know you're thinking I've lost my mind but Bully really is a stuffed bull and he has his own blog called Bully Says:Comics Oughta Be Fun. It's, as the name says, a comics blog, but he also writes on anything that interests him, for example he did a long series of posts on P.G. Wodehouse that actually fit nicely into the over all scheme of the blog.

As you've no doubt discovered Bully has a wicked sense of humor (Wodehouse no doubt would have been a fan). If you've read his blog for any amount of time you'll notice that while he will stay on topic he will not stay serious for any longer than he absolutely must. For the most part some where along the way the need to talk about, say ponies (see yesterday's post) will come the forefront. Of course the joke is that what at first seems like humorous quip will very often end up as fodder for something down the line.

Bully is a very clever bull. Probably much more clever than this confused human.

What I like about Bully's writing, aside from it more often then not will make me laugh out loud, is that when you're reading one of his pieces you feel as though you've actually read something. There is a weight and a substance to what he has written that makes it more than just a tossed off piece. If you read yesterdays piece (if you haven't go read it, I'll wait) you see that beyond the jokes there is substance. In the course of one review you not only got a movie review but you got a well done basic introduction to the character of Paul Temple.

There is also love in what he's writing. Yes, he'll make fun of something but its the fun that comes from loving something enough that you can make fun of it and not have it break. There is so much cruel humor around these days that sucks the life out of things, say comics or movies, that when you read a review by someone who has supposedly written a positive piece, you still don't want to see it or read it because the humor was so cutting it destroyed the supposedly good thing. Bully isn't like that, in the piece on Send for Paul Temple he chides the film, but at the same time, it's done out of love. He kids the film but still likes it. Best of all when he's done you still want to see the film.

I like his style. I think you will too. I'm just hoping that I can get him to do more pieces since he's a very busy bull.

If you like his pieces here please do head over to his blog and read some more, you will be richly rewarded.
Posted by Steve Kopian at May 16, 2010