They Fought for the Motherland (1975) 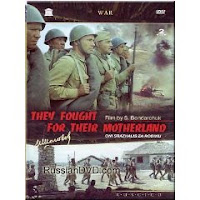 This is the second of two films from the great filmmaker Sergei Bondarchuk. Bonderchuck is one of my favorite filmmakers because his films are so different than anyone else's. He takes us into the hearts and minds of his characters managing to both show events on a huge scale at the same time showing us the effect of the people involved. For my money he's one of the most under appreciated filmmakers of world cinema.

Its 1942. The war in Russia is going badly for the Russians. They are being slowly pushed back by the ever advancing Nazis. This is the story of a regiment who's slowly dwindling numbers try to survive and remain optimistic as they continue to try to prevent the enemy from ever reaching Stalingrad.

This is a great war movie. As with all Sergei Bondarchuk films this is a movie that makes you think and feel by showing you what its like to be a lone man in a huge situation. We get to go inside the heads of the various characters and we see what its like to be in battle. The battle scenes are good as the Russian soldiers simply try to survive the strafing, the bombing and to keep the Germans far enough away that they don't have a good chance at killing them.

In someways this film reminded me of Terrence Malicks's Thin Red Line which used similar techniques at times (for example: subjective camera, manipulation of the soundtrack, disjointed flashback.) Actually this movie reminded me of several other war films produced after its release. I'm curious if film makers like Francis Ford Coppola and others studied copies when they made things like Apocalypse Now.

As good as the film is, it isn't perfect. The film can come off as a bit too "rah rah" for mother Russia at times, even though the film ultimately speaks to the larger question of defending one's own home land. The film can also be a unfocused in the second half as the film takes some odd turns; then again the second half has some of its most powerful imagery with the young nurse trying to save the wounded man in the bomb crater and the return of one soldier from hospital.

See this movie. Its a great great war war film which only suffers when compared to some of the gems in the Sergei Bondarchuk back catalog of films.

This can be had as an import. I picked this up from an e-seller at Amazon.
Posted by Steve Kopian at May 30, 2010