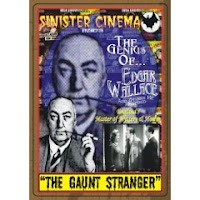 This is one of my favorite Edgar Wallace films. I've seen this film a few times and I've give people copies because I enjoy it so much.

This is an adaptation of Edgar Wallace's "The Ringer". The story, which was remade as part of the German 1960's Wallace series, is a nifty little thriller, much better than its remake. Boasting not only a neat little mystery it also has a game cast that sells the story.

The plot has a well known criminal lawyer threatened by a master criminal known as the Ringer. The lawyer is not worried since the Ringer is believed to have died in Sydney Australia. However he begins to worry when he finds out that the flowers bearing the threat were ordered from a ship coming from Sydney. The Ringer it seems wants to exact revenge for the death of his sister who committed suicide because of the attorney. Add to the mix the police, Scotland yard, the wife of the Ringer, and several crooks who had dealing with the attorney's fencing operation and you have a movie where anyone could be the killer.

I really like this thriller. An Ealing film, this film is clearly a kin to the later series of comedies that starred Alec Guinness. While most definitely not a comedy, it does have some very witty lines, solid performances and sharpness of construction of the sort that made the later films classics. I liked that every character, no matter how inconsequential makes an impression on you. Every cop, every passerby, every speaking part major and minor is a real person. When someone walks on screen you have a sense that this could be happening.

The script is filled with great exchanges between characters. The police surgeon has a wonderful way of putting people down or inferring he may know more than he is letting on. The jailbird, sprung because he knows what the Ringer looks like turns in some hysterical remarks in his vein attempt just to be sent back to prison where its safe.

The construction of the plot is better than most mysteries of the time. Its understandable why the source novel was used at least five times for movies. Its nice that the film is done in such a way that even though you may guess or suspect who the killer is, you will still harbor doubts until the final denouncement. There are enough plot-lines running through this story (all adequately explained) that its not easy to piece together everything thats going on at first glance. Better still its done in such away that you're engaged waiting for the next clue to pop up, there are no dead spots as the detectives wait to be moved to the next piece, things are always happening.

One of the better mysteries I've seen, this is heartily recommended for anyone who wants a good mystery with character.

Though I have to ask, if anyone figures out what the title means could you please let me know. since it seems to have been chosen at random to cover the source novel.
Posted by Steve Kopian at May 05, 2010