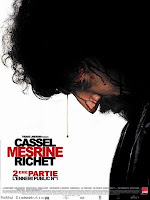 Two part film about the life and crimes of Jacques Mesrine. He ran roughshod over France, Canada and the United States in the 1960's and 1970's before meeting his maker in a hail of gun fire.

The film was released as two separate films (Part one is Killer Instinct. Part two is Public Enemy Number One), but in all honesty, other than a difference in feel between the parts this is really one four hour film. I can't imagine seeing these two film as stand alone films, especially with any time between them.

The first part takes Mesrine from his time in the French Army in Algeria through to his time on the run in Canada. It covers his marriage, his time away from crime and his growing notoriety. The second part has Mesrine's life from his return to France through his violent end.

I'm going to be honest here and say four hours is not enough to do this story justice. As amazing as Vincent Cassel is at portraying Mesrine, and as good as his fellow actors are, the film simply is trying to tell too big a tale in too short a time. Characters come and go, threads of his life are left hanging. The biggest loss was for me the relationship with his children. On some level its clear he loved them, but at the same time they are barely mentioned past a certain point. We are left with bits of a story that is more short hand. Actually much of the story is short hand (for example I was lost about their attack on the Canadian prison) and I ran to the computer when the film was done to get more details.

On the other hand as short as the film can be on story at times everything else is gangbusters.

Vincent Cassel has won a boat load of awards for his portrayal and everyone of them is deserved. Say what you will about anything else Cassel gives one of those portraits that sucks you and forces you to watch, even though things are either too brutal or not quite compelling enough. Cassel grabs you by the throat and makes you watch the film, nay, he insists you watch the film, all of it right now, even though you're too tired or its too late or what ever the excuse. When the first film ended I didn't even consider not watching the second part, I simply got up and switched the DVDs and kept going.

The rest of the cast is equally good, especially Gerard Depardieu as Mesrine's first boss and friend. As Mesrine finds out you may think he's a shnook, but he'll still take the gun from you belt without you ever knowing it.

This is an amazing film. It grabs you from the first, the day of Mesrine's demise is filmed with skill and style that you can't help but be drawn in. The film then flashes back and the film becomes a stylistic romp with the film filled with harsh blues and reds that accentuate the films tone. As the first film shifts from one part to the next the film shifts tones, becoming more realistic with the sharp colors of the night clubs and gangster hangouts of Mesrine's early life giving way to homes and apartments and the countryside where the events took place.

Say what you will the film is never boring. Sure you may wonder about characters or threads that have been left behind, but at the same time you're going to be wondering about how is Mesrine going to get out of this new scrape or situation. Come on, how can you not be draw in by a man who bargained with the cops for 20 minutes so he could get dressed and greet them with a bottle of champagne.

Its a masterful film...

...but it appears that that the film, which has caused a sensation in Europe, maybe a while in coming to the US. I picked this up as a DVD from the UK because I didn't see any US release listed anywhere. In reading on the film I see that the US distributor is having money problems and the film is caught in the mess. Its a sad turn of events but I'm sure that the film will eventually be seen, I mean seriously the film is much too compelling to fall by the wayside...

...then again this is a website that is full of films that one would have thought would never have fallen by the wayside.

This is one to put on the list to keep an eye out for. I'm certain it will be coming your way.

8/6/10ADDENDUM: This appears to be finally getting a US release. A local theater has it on their website as up coming in the fall.
Posted by Steve Kopian at July 18, 2010