Orson Welles, Chimes at Midnight,a bit of Don Quixote and filmmaking as life 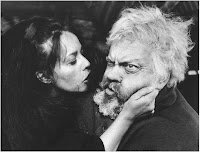 Another weekend, another pair of suggested films. This time out the films were suggested by comic writer JM DeMatteis during a conversation with Unseen Films contributor Ken Fries. The films suggested were todays film, Orson Welles Chimes at Midnight (aka) Falstaff and the Roger Corman film The Intruder starring William Shatner, which we will be doing tomorrow.

The film was the out growth of a stage production that Welles was doing which stitched together all of the Falstaff pieces from Shakespeare in order to create the story of the man from start to finish and which would give him a role that he could hold center stage for the whole evening. Welles took the production, and with the aide of some of the greatest English actors and actresses put it on film.

Let me begin with a confession by way of a long rambling aside.

While often hailed as one of the greatest filmmakers of all time Welles more often then not couldn't get the money to make a film. He would work through out the 1950's,60's and 70's trying desperately to get the money to make a movie. If you can't believe that an artist as great as Welles sold out and made some of the terrible films he did, you need to understand its because he needed the money to make the films that were closest to his heart. The result was that his personal films were more often then not were long in production, shot all over the world in a style that is best summed up as unique, at worst as choppy (in some films characters talking to each other never appear together because the shots were filmed years and continents apart), and very often many, if not all, of the voices were done by Welles after the fact because the sound was lost, never existed or retakes required an actor who was unavailable.

The sad thing about the films he made like this is that they have been cut up and mixed up by a variety of companies that did or did not own the rights which further complicates opinions about the films. A perfect example is Welles' Mr Arkardin which has been so chopped up that Criterion released a DVD edition with three of the many known versions.

If you look at the films he made in this manner or from this period it's pretty easy to spot them since they all have a certain feel coming from the choppy shooting schedule and economy of style. Some times the style and the feeling works and some times doesn't. In Chimes at Midnight the feeling works, Othello and Mr Arkardin its less successful

Another example is also his long in production film of Don Quixote which was put together in some form after his death.

Welles was working on Don Quixote for two decades. From the surviving footage it can be seen that the film had both a period setting and a modern day portion I really can't say more since Welles was cutting and re-cutting the film all along the way and so many people saw so many different cuts and sequences that its impossible to know if there ever was one grand plot line or if Welles was making it up as he went along (I vote he was making it up). And in typical Wellesian fashion Orson never had all of the footage in his possession so several sequences are apparently being held by investors who never saw any return on their investment.

After Welles died the surviving available footage (several sequences were unavailable due to investor liens) was cut together by director Jess Franco who worked with Welles on some productions and it was received with very mixed reviews. Some people loved it some people hated it. I think its a complete mess and if it weren't for some stunning sequences- say they windmills- I would argue that Welles wasn't that great a director as we thought. (Franco, who has taken numerous brickbats for his cutting of the film, has rightly stated that he did the best he could with what he was given.)

In all honesty I would dismiss the film and Welles except that since I saw the film I read several interviews by Welles and his collaborators that lead me to believe that the film was never supposed to be finished. Actually what I feel is that Welles at a certain point stopped making "films" as such and just began to crank out movies that he finished because he was contractually obligated to do so. Welles loved film and had these ideas and he just shot the film because it gave him joy to do so. I don't think he really wanted to ever finish anything because if he did he's have to stop making movies. Don Quixote was never finished because it was his toy and he never had to finish it. The rest of his films were finished because he had to contractually; or in the case of the Shakespeare films like Chimes and Othello because they were the Bard, whom he respected and had a beginning a middle and an end.

Chimes at Midnight is one of the films from the wilderness years that it seems very few people have seen. It is out on DVD but the company was small and unless you were looking for it you probably never noticed that it was available, assuming you knew the film existed at all.

The film is based upon Welles Five Kings play which condenses Henry IV,V,VI and bits of Richard III into one story. The film refocuses everything so its all about Falstaff from his appearance in the plays to his final exit.

Its a film that is clearly Shakespeare and yet strangely not. The film is very much real and alive and not the formal static productions that you see with many Shakespearean adaption (I loath Olivier's films for that reason). Yes Welles resorts to a formalness of presentation at times, but that is because he's using it for effect, mostly during the sequences having to do with the actual royal court.

At times the small budget seems to have forced the film into close up and into tight odd camera placements that work wonders putting us into the action. With out a typically huge Hollywood crew Welles could get int places that are small and cramped and feel very real. The fact that Welles shot the film in a stark black and white makes the film come even more alive since the film looks more like old photographs or movie footage that might actually have been of the events.

The performances are really strong, as they should be with people like John Gielgud, Ralph Richardson and Margret Rutherford in the cast. These people are English acting royalty and the words of the Bard are like the very air to them. Even Welles, in a role that was very close to his heart, is amazing. Here is one of the few times where he was actually giving a performance and disappearing into the role instead of just saying the words and ham boning it up.

The real joy of the film is that it isn't really Shakespeare. Its not the plays we all know in the order we all expect and as a result the film springs to life with a vibrancy that many films of Shakespeare's plays do not have. By cutting loose the words and the rough story from the source plays Welles has created a living breathing film that makes the words not lines of dialog but the actual words of the characters on the screen. The film has the feel more of events that really happened instead of a rigid series of events that are following a preset course. Its best summed by the question when was the last time you watched a Shakespearean performance and didn't know what was going to happen next? (I am of course assuming that you knew the material going in)

Regrettably the film is all but lost now because it's so off the radar. Unless you saw it before or unless you are a Welles fan odds are you've never seen it. I know being in love with the Bard is no guarantee you'd know about the film since a guy at work who can quote chapter and verse had never heard of the film until I mentioned it. This is a film that is in desperate need of rediscovery. As it stands now the film is out on DVD in the US from a very small company. I have a copy of that DVD but at the same time it was hard to come buy since it took my looking at several retailers to find it. Fortunately I've heard that a major restoration of the film is in the works and with some luck this film will get a major push back into the consciousness of film and Shakespeare lovers.

Definitely worth a look, especially if you don't like Shakespeare since this is a film that may finally make the words of the Bard click with you.