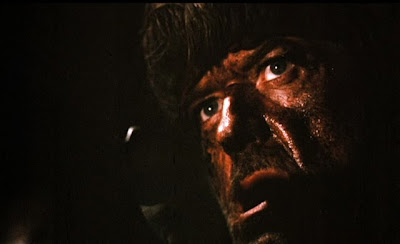 Every year a group of doctors get together and go to some out of the place location do fish for a week. This year they go to the wilds of Canada, to a place called by the Indians The Cauldron of the Moon. Cut off from the world, some 250 miles from anywhere the group hike to a campsite. One day while fishing they find that someone has taken all of their boots. Since only one of the men has extra shoes, he's forced to leave to try and get help and boots. That night the men who remain find a deer head just on the outside of their camp. They then decide to go after their friends. However it doesn't take long before they realize that someone is hunting them.

One of a number of Deliverance riffs that popped up in the 1970's  Rituals was kind of legendary growing up because the bad guys took the shoes of their victims. Not many of us saw it, it was on some odd cable station late at night, but I remember it leaving a lasting impression on those who saw it.  Actually I shouldn't have said us, since it was years before I finally saw the film.  when I did it was kind of by accident, and it wasn't until I ran into the shoes that I realized what I was seeing. Back then it didn't quite live up to its reputation, however seeing the film again I was impressed.

A tense trip into the wilderness the film smartly keeps the film focused on the dwindling group of doctors. Things are not amped up to bring scares, rather we've simply been dropped into the woods with them. Events play out in long sequences that kind of equate to real time. We feel their pain, we are always are aware they have no shoes. We, like the men on screen do not have answers which makes things scarier.

More thriller or adventure than gone wrong rather than horror Rituals is one of those nasty little films that gets under your skin and makes it crawl. Re-watching the film at home on my couch in order to write it up for the Scary Movies series I was struck by how glad I was not to be seeing it in a theater where I couldn't look away, I couldn't distract myself. The first 75 minutes or so are really really good. While it's not a perfect film, its too long at 102 minutes and the reasoning behind it isn't perfect which makes some of the end disappointing but, it's still a damn fine film- one that will make you not want to go into the woods.

It's also film that I;m guessing you haven't seen before which makes it the perfect film to see at Scary Movies. Go see it when it plays on Saturday afternoon at Lincoln Center,
Posted by Steve Kopian at October 31, 2013