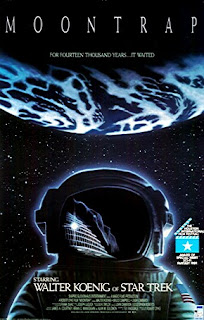 Walter Koenig (the original Chekov from Star Trek) and Bruce Campbell (Ash from the Evil Dead films) go to the moon after finding an ancient spaceship orbiting the earth and end up fighting alien monsters.

This is grand B movie fodder several steps above the crap that SYFY turns out on a regular basis. Its the sort of low budget scifi/horror film that played for limited engagements in theaters across the country and which delighted most of the small audiences who saw them. While in no way high art they are damn entertaing.

Part of the reason the film plays as well as it does is that they play it straight. Yes the cast knows its silly, I've read interviews with Koenig where he said they knew it was silly but knew it had to be played straight, and let the humor in the script shine. Yea its funny- intentionally so. For example the geeky scientist who doesn't want the miltary to hurt the alien until he talks to it. The alien attacks him and he screams "Get the son of a bitch!!!" without missing a beat.

And yes the movie has cheesy special effects but considering this was made in the days before computer generated imagery they are pretty amazing.

While the film goes into territory that was covered in other films (say Richard Stanley's Hardware , Tobe Hooper's Life Force or the Terminator films and predates Apollo 18) this film still manages to carve out it's own unique place in one's heart. Depite not seeing the film in probably the better part of a decade I still think about the film with a regularity that many other similar films from the same time never gets. This is one of those films I keep wondering when it's going to hit DVD. For some reason, despite it having Bruce Campbell in it, I'm constantly amazed that its still off most people's radar. I would guess that it's due to some sortof legal issue. I know I recently found it on the collectors market sourced from an Image Laser Disc, much like the one I still own.

This is the sort of lost film that Unseen was started to highlight. Highly recommended for anyone who likes 50's scifi films, lost treasures or the crap that SYFY passes off. This is one you'll have to search for, but will be worth the effort especially on a drive in sort of Saturday night.
Posted by Steve Kopian at November 01, 2013