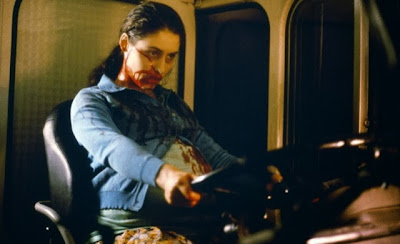 What twisted pit of hell did this film crawl out of?

This is a strange bloody affair about a primordial life form that travels from Africa inside a leopard to a circus in Northern France. Devouring it’s host it then moves on to take up residence in one of the circus performers replacing her unborn baby. It then drives the woman to gruesome acts of violence to get blood to feed it. And I should probably tell you the whole thing is told from the point of view of the monster.

A head scratcher and stomach turner here’s a film that completely was off my radar until Lincoln Center decided to run it. I’m not sure if that a good thing or a bad thing. While I pride myself on attempting to see every film eventually, sometimes things fall outside of my view and in this case this one was outside of my view.

A bloody, I mean really bloody, affair the film rocks between being blackly funny and really creepy as frequently naked Emmanuelle Escourrou battles the monster inside her, more often than not giving into the beasts sinister urges and painting rooms and herself red with blood. In it's way this a perfect midnight movie, however if one isn't watching it at midnight I'm not sure how it will play. The back and forth nature of the film certainly makes you feel really uneasy but I'm not sure it adds up to much. It also doesn't help that there several long periods where not much happens- though when it does it kicks ass.

Adding up to much or not the film is very much a one of a kind affair and worth seeing for anyone who likes their horror tinged with psychotronic insanity- more so since the print running tomorrow at Scary Movies is the uncut French version. See it if think you can stomach it.
Posted by Steve Kopian at November 03, 2013