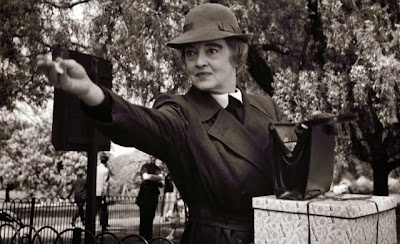 Joey returns home from a home for disturbed children after allegedly killing his baby sister. He is deathly afraid of his Nanny (Bette Davis) and refuses to eat the food she cooks or do what she says. As turmoil erupts in the house we're left to wonder who is the monster that is loose.

A great performance by William Dix as the potentially monstrous ten year old helps a great deal at keeping things off balance as to who is really to blame for the dire events transpiring. Is it the troubled kid or is it the nanny made up almost like a monster with too much makeup? I'm not saying but all is very much not right in the house.

One of the better films that came out in the wake of Whatever Happened to Baby Jane which gave new life to old school Hollywood stars in dark gothic and psychological thrillers, The Nanny packs a punch and is full of a great deal of unease. Things are very much rotten in Denmark, or in this case London and odds are you're going to be fearful of finding out just how rotten.

While I'm not a huge fan of psychological thrillers of this sort, The Nanny is one of the best, and it's easy to understand why Bobcat Goldthwait picked the film to show at Scary Movies.  If you've never seen it it's worth the effort to get to Lincoln Center and see it when it plays tomorrow with Bobcat doing an introduction.
Posted by Steve Kopian at November 04, 2013