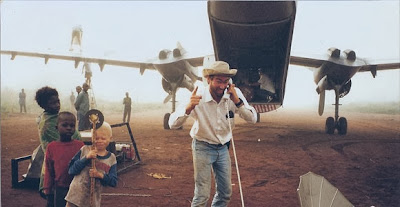 If you've ever need a reason to hate Pat Robertson this film will supply you with a damn good one. It seems that when the Rwandan genocide in 1994 was going on and all the refugees were streaming into Congo, Robertson used asking for money for humanitarian aide to finance a mining operation looking for diamonds. Robertson lied up and down about what he was doing using images of Doctors without Borders and claimed they were his people.

This is a film that will get under your skin and cause you to talk back to the screen, as a large portion of the audience I saw this with was. Its one of those great injustices of life that Robertson got away, and continues to get away with this nonsense, thanks to friends in high places who ignore the investigations which say in no  certain terms Robertson broke any number of laws.

If you ever needed something to get you really pissed off this film will do it.

And people of faith wonder why people are moving away from the church-until you consider that many churches are lead by unindicted crooks like Robertson.
Posted by Steve Kopian at November 12, 2013