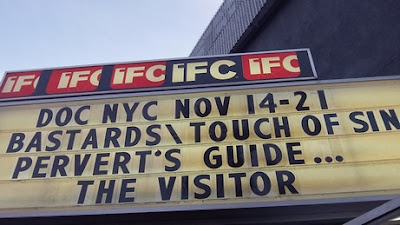 Long long day at DOC NYC was full of good films and friends. I do want to shout out to Dor Dotson who I have been conversing with for over a year on Twitter and who I finally met in person.  A good movie was made better by having some one to laugh along with.

I'll be getting full reviews up down the road but I want to just take the time and give you a few quick thoughts on the films I saw.

THINGS LEFT BEHIND concerns Ishiuchi Miyako's exhibit of large-format color photographs of objects left behind after the atomic bombing Hiroshima. The film moved me to the point where I was openly sobbing at the tragedy of it all. I have much to say, but  until I get the post up I'll leave you with the statement it's far and away the best film I've seen in 2013. (A full review will appear later today)

HARLEM STREET SINGER is about influential blues man Reverend Gary Davis. Blind since birth Davis ended up teaching a whole generation of musicians how to play the guitar and love the blues.

Its a small film that truly comes to life when the music kicks in. This is the sort of film that I'm certain is going to be snapped up by PBS. I liked the film a great deal, but found it a bit too technical at times and ita bit too confusing as to the time line of Davis's life. Still it's worth seeing.

HERE ONE DAY is the story of director Kathy Leichter trying to come to terms with her mothers death by clearing out her stuff from her apartment. Her mom had been mentally ill for two decades when she committed suicide.

One of the weaker films at DOC NYC the film seems to be almost too personal for general viewing. While I could relate to some of what happened in the Leichter house, there were times when I had no idea what was going on. What was the time line? What exactly was happening at what time? We're left hanging and I felt I was watching a well made home movie. Perhaps if someone else edited the film it would be the kick in the ass it should be.

FINDING VIVIAN MAIER is about trying to uncover the life of Vivian Maier who took over 100,000 photographs that were found in trunks and boxes after she died. By turns, mysterious, troubling and wondrous the film is deserving of all of the chatter it's gotten in some circles.  I'll have much to say soon. (I would like to ask who thought it was a good idea to have Michael Moore do the Q&A? I ended up leaving, partly because I had another movie, but mostly because he wouldn't shut up)

WE DON"T WANNA MAKE YOU DANCE is nominally the story of almost famous Miller Miller Miller and Sloan a group of musicians almost made it. Focusing on the guys over 30 years as they went from high school kids with dreams to middle aged guys with families the film shows us what happened.

A very funny film, that works best when we see the guys interacting, this is more a story of what it takes to reach your dream and be creative rather than telling all the details - the guys opened for the Clash and Chaka Khan, two things not mentioned in the film.

Longer reviews of the films from the weekend will start appearing later today so keep checking back.
Posted by Steve Kopian at November 19, 2013