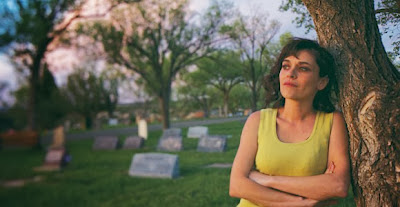 Rundown city Nucla and the surrounding towns hope to change their fortunes by having a uranium mill built in their town- the problem is that some people don't want it. They are also still dealing with what the previous mill left behind.

Good documentary poses the very serious question of what are towns and their populations going to do when the only way to prevent them from dying is to take a chance on something that might kill the entire community.

What I like about the film is that the film clearly shows the dangers of uranium, and that everyone in the towns and cities around the proposed plant knows the dangers, but it also explains why the people would want to risk their lives dealing with the radioactivity- they like where they live and want to stay there. It's a troubling dilemma that isn't easily solved. There is this wonderful ah ha moment late in the film when at yet another town meeting a woman supporting the mill states that in the five years since the mill had been put up for discussion the economic situation in the town has stagnated and that the only people promising any sort of jobs were the people behind the mill. She then adds that had the nay-sayers brought jobs instead of the killing of hope they would have had the support of the people and not the mill. Its the whole dilemma in a nut shell and very moving.

I don't have an answer as to what is the right thing to do.

I can however suggest that if you are so inclined, and want to be forced to think you may want to try the film when the film plays Friday at the IFC Center
Posted by Steve Kopian at November 13, 2013