About the daily coverage from DOC NYC..... 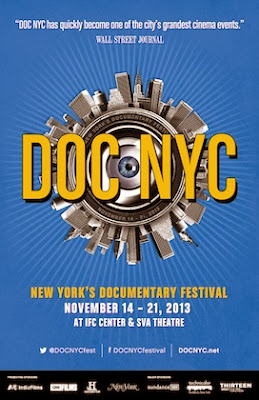 As the weekend comes to an end I just wanted to give you quick word on Unseen’s coverage of DOC NYC. Over the last few days myself and the rest of the Unseen crew has been slipping in and out of various screenings. It looks like we’ve made a dent in the festival offerings.

As this posts I should be seated in an SVA Theater with Hubert for my 9th film of the last two days and his 10th of the last 3. I have two more films on each of the next three days. I’m not sure what anyone else is planning but I know  I’m not going to get full reviews up for all the films I’m seeing. I will be getting recaps of each day’s films up starting Tuesday, but full reviews will have to wait. I’ll get up the full reviews down the line as I finish them. (I believe Hubert is going to be trying to get two posts up a day for the rest of the week.)

However instead of being a passive participant why not do yourself a favor and get yourself to the IFC Center over the next four nights for some great documentaries.
Posted by Steve Kopian at November 17, 2013

Email ThisBlogThis!Share to TwitterShare to FacebookShare to Pinterest
Labels: DOCNYC 2013