Thanksgiving Turkey:The Fall of the Louse of Usher: A Gothic Tale for the 21st Century (2002) 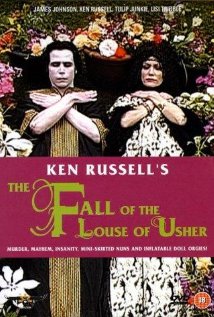 This is my IMDB review of this film which I called the titled the worst film by any director of standing ever:

This is nothing more than a cheap ass home movie done by a director who should have known better.Its not that there is anything wrong with this being made but the look and feel of it is that of a goof made among friends over a weekend for their own amusement. Regrettably someone though the rest of the world would find it equally enjoyable and released it on an unsuspecting world.

The plot has Roderick Usher ending up in a asylum for murder where goth and allegedly racy things are going on. There music and jokes and tasteless stuff. Mostly there is an undying urge to turn the DVD off and put on one of Ken Russell's other films...anyone of them.

I'm a Ken Russell fan. I've always liked that fact that no matter what he did there was always something interesting to look at or see somewhere in the movie. Here there is nothing. Its a complete waste of time.

Oh how one of the cinema's great directors has fallen....
Posted by Steve Kopian at November 25, 2013

Email ThisBlogThis!Share to TwitterShare to FacebookShare to Pinterest
Labels: England, not worth the effort, wtf