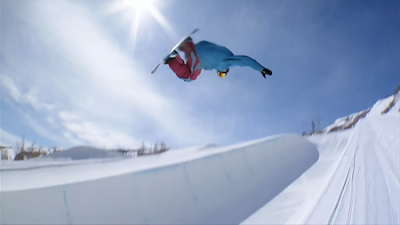 Crash Reel is another documentary home run from HBO. The film is the story of snowboarder Kevin Pearce who had an accident while training for the Olympics and suffered a traumatic brain injury (TBI). The joy of the film is that the film isn’t just about Pearce and his struggle, but it throws its net wider to look at TBI’s in a larger context from other sports to the effects upon the families and friends of those afflicted.

Thanks to the rise of home video and camera phones Crash Reel documents the complete life and times of Kevin Pearce as he goes from a little kid trying to do what his older brother did, on to becoming the best of the best who was able to turn pro at the age of 13. He then rapidly rose up through the ranks to become one of the best snowboarders ever. The film follows as Pearce forms a friendship with Shaun White another snowboarder. It’s a friendship that would turn competitive and spark a the desire to beat White resulted in Pearce trying a trick that caused his injury.

While life before the accident is an exciting collection of snowboarding events, its once the accident that things get interesting. The accident, which occurs about a third of the way into the film is the catalyst for a discussion of the risks we take to challenge ourselves and the toll it takes on the people left to pick up the pieces. Watching Pearce fight his way back from the brink of death is amazing, more so when you consider that we also see the death of two other people who didn’t have the luck that Pearce did (They both died in the same hospital and under the care of the same doctors as Pearce. Why did he survive? And now that he has survived will he dare try to go back and do what he did? It’s a prospect that frightens his family especially when the hope of knowing that the TBI can be overcome is tempered by finding out that the people who came back ended up being reinjured with worse results when they went back to doing what had hurt them to start.

Do we have a right to challenge the odds if it means its going to lay waste to our loved ones?

Also mixed in there is a discussion of are we allowing sports like the half pipe to get out of control. Once the walls were six or ten feet high and now they are two and three times that meaning that the falls are two and three times greater, the speed at impact that much greater. Have we reached a point where we have to decide whether the fact we can go farther and faster simply no longer worth it? (Dragsters can go faster but the drivers know it’s too dangerous to do so they don’t.)

It’s a film full of hope and food for thought.

Three cheers to HBO for running the film.

The film is screening as part of DOC NYC Friday morning at 1115 at the IFC Center
Posted by Steve Kopian at November 11, 2013