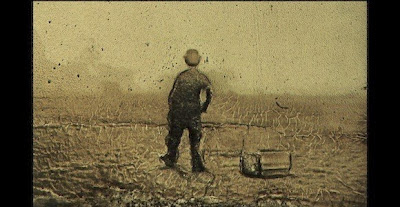 Chuck Workman, the man responsible for the Oscar montages has put together a film that attempts to explore the notion of what cinema is. Its an often breathtaking film full of great clips and wonderful quotes and interviews. Sadly the film as a whole is real mess with the marriage of word and image never coming together.

The point of the film is to examine what cinema is: What is cinematic art? What is big screen story telling? In order to examine the ideas which are expressed through various interviews with film makers (David Lynch, Michael Moore, Hitchcock, Robert Bresson) and in quotes from various sources Workman marries the notions to clips from films from the history of film. At times the perfect words meet the perfect film moment- at other times it misses by a mile and you want to ask Workman what he was thinking about the things he was linking up because the connections just aren't there.

Actually the problem with the film, and it’s a HUGE problem is that unless you know the films, and the clips (and even some of the interviewees) the resonances of marrying word and image are going to be completely lost. I was most aware of it when I saw the clips from Blancanieves and Werckmeister Harmonies films most people I know don't know exist let alone have seen. Since they won't know what the clips are from I had to wonder if will people understand the implication without knowing what the scenes are? I don’t know. I don't think so since some clips I kind of recognized flashed by without meaning for me.

The experience of watching this film is kind of like flipping through an artist’s sketchbook, some of the things you’ll find are great and some of them are not. Complete works mix with half formed doodles. Its intriguing but not fulfilling. To be honest I was kind of done fifteen or twenty minutes in. I had this feeling this wasn’t going to work and I was right it never did- not as a whole film.

In a weird way I’m glad I saw this big, but at the same time I don’t know if I needed to see it at all (though it did remind me as to how beautiful The Shining and several other films look on a theater screen).
Posted by Steve Kopian at November 22, 2013