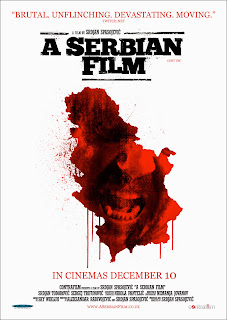 "That's fucked up", those were my exact words as the closing credits fell during my first ever viewing of A Serbian Film. Perhaps I'm reluctant when it comes to films with Warning's attached all over it, that led to me passing on this for the past few years. I'm a fool for listening to the internet. I've been burned one too many times, and by that I mean my wallet has been burned for buying into such amateur crap like August Underground, Murder Set Pieces, just to name a few examples. Those films are trash. I don't mean to turn this into a name dropping effort, but it's slightly amusing how so many of these newer films try so hard and yet have come nowhere close to producing such nightmare inducing horror like Cannibal Holocaust, The 120 Days of Sodom (Salo) & Nekromantik. Those films are over 20 yrs old, and in my opinion nothing since has surpassed them in the 'shock' factor. That was until…
A Serbian Film follows the story of a retired middle-aged male porn star named Milos, who receives an offer to do one final film. Something that will leave him, and his family financially set for life. Reluctant at first, especially after meeting the director of the questionable film, Vukmir, Milos signs onto the project. Despite having no knowledge or impute on anything that will be filmed. And that ladies & gentleman is where things take an extremely dark and twisted turn.
I can't recall the last time I watched something that has stuck with me like A Serbian Film. It went down roads that I didn't think were possible. And here I thought I've seen it all, but nope clearly not. I suppose when something has left this kind of impact, that must mean it was a great movie? I honestly don't know the answer to that though. I had some issues with certain characters in how they seem to switch back and forth with their intentions. It does go a tad over the top during the final act, but it is exceptionally well shot which came as a pleasant surprise. I suppose I've become accustomed to expect low budget, poorly acted, film school-esk production from these types of films. Yet I don't know how I could possibly recommend this. That would be a much easier task to put on someone I dislike. Though here it is a few days after watching it and it's still heavily on my mind. I suppose I really did enjoy it, but geez that just sounds wrong.
Despite the film's disturbing nature, and trust me if you've never seen it, it is quite something,  it never feels exploitative. Some may disagree, but it all depends on how you view it. The near 10 min-long rape scene in Irreversible, is exploitative. A chain link of people attached from mouth to anus in Human Centipede is...ok, well that's just stupid. Bad example. The director of A Serbian Film, Srdjan Spasojevic has said that his film is supposed to show how his own government, the Serbian government has controlled its own people to do such heinous acts, as portrayed in the film. It's uneasy to watch, it's gritty, it's brutal, but that's reality.


I don't want to get into spoilers, but the never ending pit of despair that our main character Milos is forced to go down is surely something that will be forever be burned into your brain. With it's graphic depictions of rape, necrophilia & pedophilia, it's no wonder why this has been banned all around the world.
It's not often that I can say this, but for me it lived up to everything that's been said about it. Despite my initial hesitation.  I've spent nearly my entire life watching Horror, thousands upon thousands of films, and A Serbian Film very well may be the most disturbing damn thing I've ever watched. This is truly the real deal.