Extinct Attractions Club DVDs: The Haunted Mansion and Pirates of the Caribbean 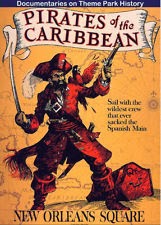 These DVDs and the others in the short lived series are damn near impossible to get. Produced by now very defunct Extinct Attractions Club these are the sort of DVDs that Disney themselves should be producing but never will since they probably would feel that it would some how cut into their profit, and reveal too much of the behind the curtain illusion.

The series, which included several other titles like the People Mover, Tiki Room and others, none of which I have ever managed to get my hands on, are a mix of new material, old TV segments, home movies, interviews and production art.

The two sets I have, which were picked up at a nostalgia show, are the ones for the Haunted Mansion and Pirates of the Caribbean.  and for the most part they are pretty good. The highlight of each set is the documentaries that tell you everything you ever wanted to know about each attraction but were afraid to ask. The documentaries are filled with interviews with some of the creators who talk about what really went on with the creation of each ride.  If that wasn't enough the discs also contain additional interviews and tons of production art and stills. To be quite honest the discs are way too much of a good thing since the talk on the extras will drift into the realm of minutia.

Of the two sets the Haunted Mansion one is probably the better of the DVDs since it has two different trips through the Haunted Mansion that were filmed by visitors to the attraction as well as some of the film footage of the ghosts isolated. Its a real joy to watch even for someone like me who has never been to the theme parks.

I like the sets and recommend the sets if you can find them- I'd check Ebay where they frequently show up.

I'm left to ponder if there ever would be a way for these sets to show up legally short of Disney themselves putting out the material. I doubt it. I suspect the pirated use of the TV segments are what sealed the series doom since there is no way to argue that some of the 15 minute segments are simply fair use. I would love to see if away could be found to get the documentaries and interviews really out  since theyreally  take you inside the creation, but I doubt that's happening since Disney has threatened a million dollar plus lawsuit to the producers if the DVDs ever surface again.
Posted by Steve Kopian at November 08, 2013