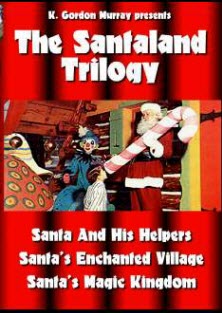 K Gordon Murray’s Santaland Trilogy is best described as a cinematic bash in the head with a sack of coal. This is one of those times when you clearly see what sort of greedy individual some producers can be.

The trilogy, three short films that were to be inserted into various K Gordon Murray holiday extravaganzas and clip collections follow The Big Bad Wolf, Stinkie the Skunk and Puss N Boots from some of the other films Murray imported into the US as they carry on at Santa’s village at the North Pole. Actually what it involves are some poor knock off costumes of the characters (The wolf is the wrong color and Puss’s face is all wrong) as they wander around a low rent storybook theme park in the middle of summer. Variously poorly costumed elves wander around as do lots of children who look completely bewildered by what the adults amongst them are doing. You can feel their embarrassment.

Each of the films runs about 12 minutes with its own opening and closing. They are also post dubbed so that when in the third film the princess sings her voice is just ever so slightly off from the lip movements. Doing it this way also allows for the voices of the costumed characters to be added in later. The plot of each part is a variation on a theme, looking at various locations in the amusement park…er… Santa’s village before the Big Bad Wolf causes trouble. It’s an anemic thing to do, especially when one part has the wolf causing trouble in an invisible dimension so we don’t see anything happen we just watch people’s faces for four or five minutes while we hear the wolf battling with Merlin.

If you ever wanted to see the classic example of a rip off film this is it. This was put together as purely a money grab and nothing else… It’s such a money grab that the segments themselves are beyond bad. Murray clearly didn’t care what sort of crap he put on screen and it shows. For all I know this was filmed by some tourist at the park and Murray simply knocked the poor man down and stole his film.
Yea it’s that bad.

Worse any fun you might have watching these films dies about three minutes into the first film when it hits you what a turd ball this is and how its never going to get better. In a weird psychotronic way I love the Red Riding/Puss N Boots/Big Bad Wolf feature films (see separate reviews) but this piece of trash is awful.

I hate these films a great deal- but I’ll be damned if I’m going to give up my DVD with them on it- I mean one needs away of nonchalantly clearing a family gathering fast- and if you ever put these films on and say you like them not only will family leave they will flee and never return.
Posted by Steve Kopian at November 26, 2013