There Will Be Blood...And Umbrellas: The Oldboy Panel @ NYCC2013

It was with some trepidation and more than a little skepticism that I regarded news of the upcoming Old Boy remake, directed by Spike Lee and with a screenplay written by Mark Protosevich. It wasn’t concern over how faithful the American version would be to the original story . A panel on book-to-film adaptations at the Tribeca Film Festival in 2012 and other film-related events have shifted my thinking on any sort of adaptation to look for merit in what original twists they bring to the source material. It should also be kept in mind that the original Oldboy movie is itself an adaptation of a Japanese manga, and its radical departure from the multi-volume series is an exciting improvement on the printed story.

In fact what had recently troubled me most was the surfacing of a trailer for the American version, which featured an almost shot for shot reconstruction of the Korean movie’s classic opening sequence. The prospect of nothing new being brought to the table coupled with the strong suspicion that a US based production would not dare brooch the unsettling taboo territory of the original’s final punch, I feared we’d be left with nothing more than a copy and a copout.

The preview panel for the Spike Lee remake that went down at this year’s NEW YORK COMIC CON, which will be released in theaters November 27, turned my reluctance to curiosity, enough so that I am committed to venture, as spoiler-less as possible, into a large cinema to give it a proper theater viewing and see what’s in store, good, bad, or just different. Along with supporting cast members Michael Imperioli and Pom Klementieff, screenwriter Protosevich was on hand to discuss the adaptation of the original film enthusiastically, thoughtfully, and with a sense of appreciation for the original’s status. (Star Josh Brolin delivered a video message before a clip from the film was shown.) 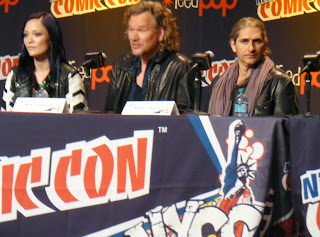 The talk, accompanied by a newly unveiled clip from the film revealed some interesting aspects of the remake – along with plenty of details to speculate over (and being the huge fan of the original that I am, speculate I shall). There will certainly be some variations in action sequences, as the clip shown featured some very gruesome violence rendered with a hammer by Brolin as the protagonist. While that particular tool has come to be legendarily and controversially viewed as an iconic aspect of the original Oldboy, the Korean film featured nothing as graphically visceral as what was shown in these few seconds of the new one. We also get a glimpse of Brolin exerting physical and psychological terror on a character played by Samuel Jackson, presumably to attain information. A dashed line drawn around Jackson’s to emphasize what could come next recalls that famous imaginary line that appears in the original, suggesting the trajectory of Oh Dae-Su’s hammer toward the skull of a thug standing between him and his goal.  The scene is both talky and sweary – add that to the presence of Jackson and one can’t shake a bit of a Pulp Fiction vibe, plus perhaps wonder how much of the film is pervaded by this feel.

Other changes we can count on is the casting of a female in the role of the antagonist’s bodyguard (French actress Pom Klementieff), a significant changeup from the original film where the equivalent role was played by Kim Byeong-Ok, a natural at portraying seedy, smarmy characters. Klementieff is pictured here on the panel. She spoke of some of the physical duress and injuries suffered during the course of shooting, suggesting a good dose of fight choreography is on hand. Then there was the fashion show like parade of expressionless, yellow umbrella holding ladies, whose procession began the panel, after which they remained motionless through its duration. My guess is that these figures have something to do with triggering different stages of hypnosis undergone by the main character, something that was connected to cellphone ringtones in the Korean movie. 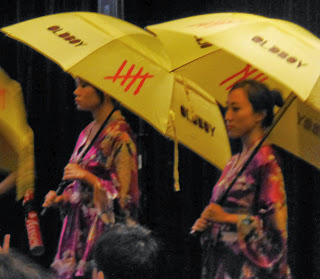 In terms of what of the original will stay and what will go, Protosevich described conversations with Spike Lee wherein they discussed a desire to keep in certain iconic imagery strongly associated with the original film, yet leave out aspects that may not translate culturally. Considering this, the decision to leave the opening imprisonment sequence mostly intact makes a bit more sense. And it is probably unlikely we’ll be seeing Josh Brolin go all cannibal on a live squid. Protosevich used a simple yet very effective analogy of bands doing cover versions to describe their approach to the adaptation: (You) want to maintain key elements of the original, the melody for instance, but at the same time change things up enough to give it its own identity while still being recognizable.  Following this logic may suggest that Protosevich and Lee did not look to impart any new themes through their rendering of a new version. We may very well be getting a remake that appreciates the original as a pop action affair, simply presenting it in a different way.

Then again, how they will deal with one of the original film’s most intriguing aspects – its unfathomably shocking conclusion – is still shrouded in mystery. Protosevich emphatically  promised a story that goes into far darker territory than the original; that’s quite a hefty claim considering its predecessor. Still, there is no telling if this means the new Olbdoy gets into the same discomforting subject matter or not; during the q & a, both he and a few fans of the original movie were respectful of maintaining the element of unknown for those unfamiliar with the first movie.

One last detail we can anticipate, as indicated by the clip shown and the q & a, is Josh Brolin on a bike peddling furiously through Chinatown. One savvy audience member thanked Protosevich for writing us a callback to Brolin on a bicycle; it previously occurred in the ‘80s movie Goonies. Thinking on some 2-wheeled activity that myself and another Unseen stalwart who goes by the initial C have been up to in Dumpling City of late, I hope these scenes are not too much of a bad influence.

Spike Lee’s remake of OLDBOY is due out in theaters on November 27th.