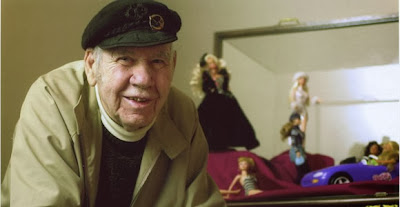 While on vacation director Jeremy Workman received a call from a friend saying he should stop by the home of a man named Al Carbee and ask him to see his art. Workman did just that on his way home to New York with the result that a years long relationship and familial bond formed between himself, his girlfriend and the artist in Maine.

When Workman met Carbee he wasn't sure what he was getting into. Carbee's home was a bit run down and once he was inside  he found lots of fish tanks filled with guppies and lots and lots of Barbie dolls that Carbee used for his art which involved photos that were turned into collage. Workman cut the footage he shot that day into an award winning short. However over time the relationship deepened and Workman and his girlfriend became good friends with Carbee which spawned voluminous exchanges of letters and videos.Workman found himself documenting Carbee's life and art

I don't know where to begin. Perhaps I should say don't let the notion that Al works Barbies fool you, because it isn't fair. What starts off as look at a seeming crackpot artist turns into something strangely moving. Al grows on you. His art which at first seems weird, turns into something strangely compelling. The film by turns goes from a yuckfest at Al's expense into something moving. The film was not what I expected nor was my reaction to it.  I know that when the film started I wasn't expecting to have been as moved by it as I was.

The film is kind of a weirdly akin to Resurrect Dead:The Mystery of the Toynbee Tiles and Realms of the Unreal, in that all three films deal with outsider art and weird preoccupations with other worldly things. The big difference is that here we get to meet the artist face to face and in those two films they remain off screen.

Despite the fact that some bits of this film run a little too long (there is a bit too much of Al's videos for my taste) this is a really good film. Actually it one of the real surprises of DOC NYC and perhaps the film year. Rarely has a film that I was kind of sort of interested in so pleasantly surprised me. I like to be pleasantly surprised.

If you have nothing better to do I recommend you get to the IFC Center on Thursday and come to know Al Carbee and his Barbies.
Posted by Steve Kopian at November 15, 2013