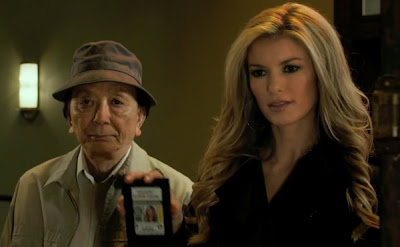 Box office disaster was a weak attempt at copying Men In Black but with dead law men trying to stop deados or souls that refuse to cross over and turn into monsters.

Ryan Reynolds plays a semi dirty cop who tells his partner that the gold they stole is going to be given back. His partner, Kevin Bacon, has other ideas (he needs it for his own supernatural reasons) and he kills Reynolds who ends up in RIPD. Given the choice of damnation or being a cop again, he takes being the cop. He's teamed with a crusty 19th century law man played by Jeff Bridges.

Low grade guilty pleasure is a film that I probably shouldn't recommend but once this review posts it will be long gone from theaters so it can safely be seen on cable or netflix or somewhere else. Stumbling over its own feet repeatedly the film remains watchable, especially if you're not paying or paying much to see it thanks to some great little bits- Jeff Bridges annoying cartoon law man does have some great lines and one or two kick ass moments, Mary Louise Parker is a blast as the Bridges and Reynolds boss (with her final moments on screen a hysterical joy), and any film that has James Hong (he's the way the world sees Reynold's character) is okay in my book. I should also point out that seeing the film on home video will deprive you of the excellent 3D which works to great effect, something most other summer movies didn't manage.

To be honest there is a great deal wrong with the film, its to much stuck in a formula, the plot is scattershot, and some of the special effects aren't special, but at the same time there is enough good that not paying movie theater prices to see it makes it worth at least trying on home video. And while we at Unseen try to recommend really good films for you to see, occasionally just okay ones have something that make them at least worth trying.

Worth trying when you run across it.