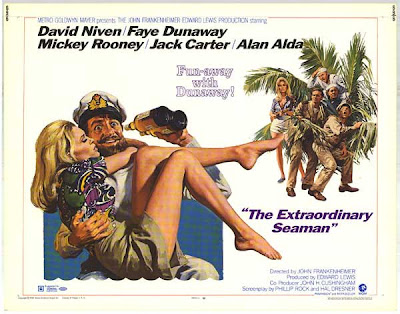 This is a really bad movie, not fun, just bad. The premise has Niven as a dead sea captain haunting a boat until he does a heroic act (Its WW2 and he's been dead since WW1). He's always in white and constantly drinking and never eats. Eventually he confesses his state to Alda who is a high strung CPA who can't figure out whats wrong with the Captain. Intercut with the funny footage is newsreel material cut mixed with witty lines and odd music.

Its almost like MASH in some technical ways (the camp announcements say relating to the newsreel narration) but the effect is a stone faced silence. I kept going on with the film to see what was wrong, and its purely the fault of the direction which treats the material too realistically, and Alda who's patented shtick and mannerisms are completely wrong (think MASH at his silliest). How Alda survived this horrible miscasting amazes me, but then weirder things have happened.

Not quite one of the all time stinkers that the Medveds once dubbed it in their 50 Worst Films book, but its bad
Posted by Steve Kopian at November 29, 2013

Email ThisBlogThis!Share to TwitterShare to FacebookShare to Pinterest
Labels: comedy, not worth the effort, war