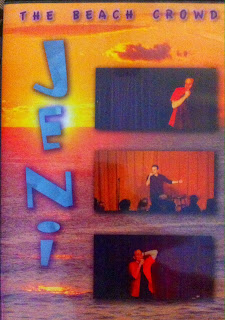 Comedian Richard Jeni was one of the best and funniest stand-up comics of all time. He had several HBO and Showtime specials, some more for Comedy Central, he appeared in a few films (including The Mask with Jim Carrey), and he even starred in a short-lived sitcom based on his material called Platypus Man. But for all that, he was basically a nightclub comic. And this 75 minute DVD, The Beach Crowd, presents him in his "natural environment", as he tackles subjects as diverse as the relationships between men and women, The Crocodile Hunter, The Perfect Pancake, and rats in the house...and along the way you also get Robert Stack and Walter Matthau impressions, a dog that sounds strangely like Jimmy Durante, plus a recurring Joaquin Phoenix impression from The Gladiator film that Jeni was obviously rather taken with. And his dolphin impression is so spot on, it will leave you wondering "IS that a dolphin up there?!?"

The material on the DVD was all taken from single-camera footage, as Jeni recorded all of his performances. This DVD combines 4 separate evenings from the Comedy & Magic Club in Hermosa Beach, California. Two of the performances were from August 2002, and the other 2 were from late June/early July of 2006. As mentioned, this is not on the scale of the big cable network comedy specials. There's no elaborate stage, no multi-camera shoots, no vast auditoriums filled with a couple thousand people. It's one man alone on a stage barely big enough to accommodate the average family car, playing to a packed house...except the house isn't much bigger than your house. There is absolutely no glamour in this production whatsoever. Which is the point. You get to enjoy Jeni doing what he did best: performing night-in and night-out for 25 years, constantly honing his craft, able to weave stories together in immensely funny and entertaining ways.


Since this footage was never intended for public consumption, it needed some work to make it viewable. According to his sister, Mary Colangelo, who manages Jeni's estate and put this DVD together, "the footage spent a year in post production to bump it into a level where it could be viewed without the audio and visuals pulling the focus away from the performance."  One of the reasons she picked these particular performances was because of the unusually high amount of audience interaction. There's quite a bit of people shouting things out, sometimes relevant to what was being discussed onstage...often not...and watching Jeni handle it all perfectly in stride is another treat for the viewer. Seeing someone perform something they've practiced over and over is one thing, but watching someone handle a bump in the road and incorporate it into the practiced performance makes it even more enjoyable.

Another thing to note about the contents of this DVD is the fact that the audience reaction is genuine. Since this WASN'T a cable network special, the crowd wasn't being overly-hyped up by producers, or just overly-hyped up themselves knowing they would be on TV. You're witnessing, and are practically a part of, a real comedy nightclub experience (aside from the two-drink minimum, which you may or may not want to participate in of your own volition). This is a very entertaining look at a real comic doing what real comics do for the majority of their careers. Perhaps the best part of The Beach Crowd is that practically none of the material contained on it was ever released in any of his cable network specials. For fans of Jeni, this is a chance to essentially see a "new" performance from the man who, at the time of this writing, has been gone for well over 6 years. If you were lucky enough to have seen him live, you may even recognize a bit or two, and the chance to have those laughter-filled memories brought back in great detail is one well worth taking.