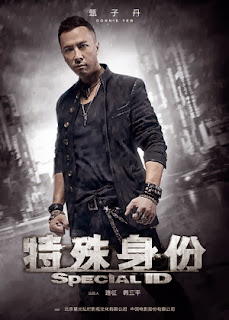 The New York Chinese Film Festival was this week running from Tuesday to Thursday.  I was there for part of the opening night (pictures are coming) and I'm trying to get reports from Wednesday's all day screenings, but for right now I'm going to talk about the screening of Donnie Yen's Special ID.

Actually what I need to say is that Thursday was all Donnie Yen, with a screening of Ip Man before Special ID. I skipped Ip Man having seen it several times before. That meant missing the Q&A after the film, but, as you'll see in a day or so, Hubert and I had  something better, a private interview with Donnie Yen where we could ask anything we wanted. You'll be able to read what happened when its finished being transcribed.

The plot of Special ID has Donnie Yen's deep cover police officer wanting to come back out of the underworld. Before that can happen he has to follow the orders of his criminal boss and go from Hong Kong to China to retrieve some stole property. His cop boss sees this as a chance to bring down a criminal organization, the crime boss sees it as a way of killing several rats including Yen.

There isn't much here. Donnie has a bunch of kick ass MMA inspired fights and meets his match in a beautiful mainland cop. To be honest the film is largely disposable, with a plot line that is more an idea of a plot which hampers several of the action scenes because there is no real connection to anything. By the time the final fight comes (which strangely and easily is the dullest fight Donnie Yen has ever been part of) I was ready to go on to the next thing.

To be certain I'd love to see the film again, but only to watch all the fights, except the last one.

When the film ended. there was supposed to be a Q&A with Donnie Yen, but instead the film simply restarted, which meant Hubert and myself got to see the wonderful opening fight at the Mahjong game.

If you like kick ass Donnie Yen fights wait for this to go streaming, otherwise take a pass.

(And keep an eye out for our interview with Donnie Yen in where he talks about the problems with Special ID. It will be appearing in the next day or so.)
Posted by Steve Kopian at November 09, 2013