Saturday at DOC NYC: A WORLD NOT OURS, IN NO GREAT HURRY, TOUBA and THE PUNK SINGER 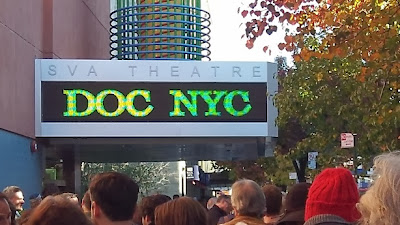 DOC NYC is kicking my butt. Its too many films in too short a time.  I'm going to go back and give many of the films I've seen and am seeing, from Saturday to Thursday longer reviews,but for now I'm just going to give you an over view of the films and events of Saturday.

Before I begin I have to pose the question, how is that anyone can see some films at some festivals when the audience seems to be full of friends and family? I was in and around several screenings on Saturday that seemed to be all friends and family. Was I the only guy who bought his own ticket to some of the screenings?

The first film I saw was Mahdi Fleifel's kick ass documentary A WORLD NOT OURS. Fleifel grew up for a time in a Palestinian refugee camp called Ein el-Helweh. Because he was once lived there and has family there he is allowed to return. The film follows him as he returns to the camp in 2010 to see his family and friends around the time of the World Cup. Playing like Kafka meets Woody Allen the film is at first funny, then troubling and then finally incredibly moving.  I'm still processing the film which had me staggering out into the early afternoon sunlight. A longer review will follow, but know it's one of my favorites at the festival.

IN NO GREAT HURRY: 13 LESSONS IN LIFE WITH SAUL LEITER needs to be seen away from the crush of films. Coming right after the previous film it paled in comparison.  In all honesty I considered walking out -partly because I wasn't in the mood and partly because there was a steady stream of latecomers who arrived until the film was almost over- including one woman who arrived in the elevator about a third of the way in. I mention this because upstairs at the SVA the elevator is next to the screen..(The the band of cute pretty smelling young ladies who ended up sitting around me was a nice distraction)

The film is an interview with photographer Saul Leiter which is being held as he cleans out his apartment and is going through materials.  We see some of this photographs as we listen to Leiter's self deprecating and on target wit. Leiter is hysterical and incredibly wise. His observations are amazing, as are his photographs.

Definitely worth seeing, especially if you can do so on it's own terms.

TOUBA is a must see on a big screen. Its a sensry overload film about the  Grand Magaal, a Muslim pilgrimage in Senegal that has  over a million pilgrims going to the title city. Shot over seven years the film plays like a tone poem where you are literally there. Its one of the coolest experiences I've had in a theater this year.

The only draw back was some dickhead behind me who was grumbling about how stupid the people could be to believe the nonsense.  I wanted to smack him and ask him why he came to the film if he wasn't just going to go with it.

An amazing film. Put it on your must see list.

The final film of the day was THE PUNK SINGER about Kathleen Hanna of Bikini Kill and Le Tigre. The film follows her from her college day to the present.

I'm the wrong audience for this film Its good, I like her music but I never completely connected with the film. Part music biography and part feminist manifesto the film seems to be designed for a very specific audience. I had good time, but the rest of the audience loved it more. It didn't help that Hanna told better and more detailed stories at the Q&A than were in the film (Eden is going to write the film up in a full review)

After the film Hanna did a Q&A and rocked the house. Put the Q&A in my top ten of all time. She is funny and engaging and just a great person-who gave me one of my favorite moments of the festival by just wandering over and talking to a bunch of teenage girls sitting int the front row after the film. It was way cool.

After that I headed home.

Pictures from the days events can be found over at our Tumblr page.