DOC NYC SHORTS From Then & Now :LAST DAYS OF THE VIDEO STORE, OF MEMORY & LOS SURES 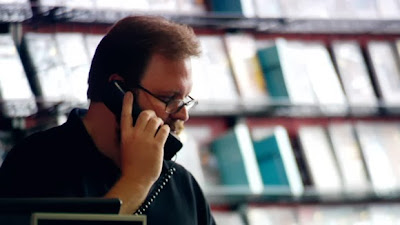 LAST DAYS OF THE VIDEO STORE
Last days of Rocket Video which has been hit by Netflix and changing viewing habits. The film charts the change in location of Rocket as it shifts locations in order to try and stay open.

A good five minute look at what people who love movies and DVDs and tapes will do to try and save the things they love and their livelihood. A bitter sweet film,especially in light of the once mighty Blockbuster going under, the film is a nice elegy to an almost vanished way of being entertained. 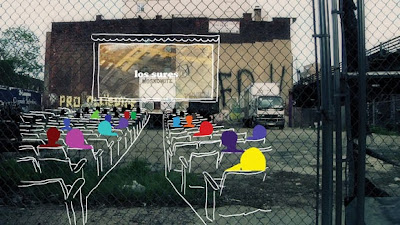 OF MEMORY & LOS SURES
Absolutely lovely portrait of the Puerto Rican neighborhood in South Williamsburg, Brooklyn known as Los Sures. Using  a mix of animation, photo montage, film, and the recorded memories of residents directors Andrew Parsons & Laurie Sumiye have created an amazing little film that is tactile and very much of the place.

What I love about this film is that it uses photos and film of places now and then over lays them with animation in order to show you what some place used to be like. For example the picture above is a picture of the vacant lot that used to be the Commodore theater. The lines are the arrangement of the seats. Through the simple technique we are no longer listening to a story but brought physically into a particular time and place. Its all the more amazing if you've ever been in the neighborhood.

This is a really cool portrait of New York, of Brooklyn and of a place that is very much alive. Worth making the trip to go see the film when it plays Thursday night.