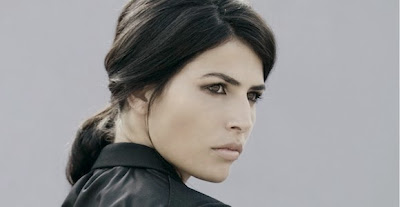 My last trip to DOC NYC was earlier tonight to see BRAVE MISS WORLD a film about Linor Abargil who was raped and nearly killed a mere six weeks before becoming Miss World. The film follows Abargil as she sets up a website to help other victims and tours the world to show supported for victimized women. We also see how the rape and it's aftermath impacts her life.

Its a tough subject and its important to see how Abargil tries to remain strong. There are some really moving moments in the film.

Unfortunately as vital and important the subject is, the filmmaking is way too slick and too distancing to ever really work. There is a manipulation of time and events (a dinner between Abargil's fiance and best friend appears at several times as if it was different meeting when it seems like it was only one dinner) and I had the sense that more than a few moments were arranged for the camera.

I very much want to say some critical things of the film, which left me feeling unmoved and unconnected, but I don't feel comfortable doing so. I fear it may be taken to mean I'm knocking the subject, when I'm not. The film says everything dead on right. It portrays the way people should handle rape and its victims dead on perfect  but its so artfully constructed that whats it's saying gets lost in the craft of fimmaking. I don't like the slickness and flashy way the film is put together. But since I feel anything I say will be taken to mean something else, I'm not going to say anything except that the film kind of moved me intellectually but emotionally I left feeling nothing. For my money this should have been better.

The choice to see the film is yours.
Posted by Steve Kopian at November 21, 2013