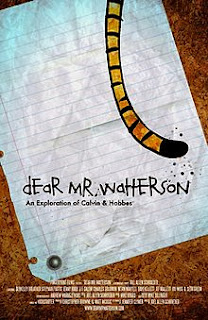 Before I begin this piece  I need to determine if you are the right audience for this film;

a- Do you have no idea what Bill Watterson's comic Calvin and Hobbes is? In not this film really isn't for you.

b- Are you fan of Calvin and Hobbes, but have no real idea about the man, his comic and comic history? Alternately are you such a rabid fan that you simply must see any thing Calvin and Hobbes no matter how trivial? Then you are the audience for this film.

c- Are you a fan of Calvin and Hobbes, know a little bit or more about its creator and have some knowledge of the history of comics? Then this film is not for you.

DEAR MR WATTERSON  is a  repetitive documentary that tries to explain the importance of Calvin and Hobbes to its fans and the comic community but comes off as bit too self serving and in love with its subject. Its a film that works in fits and starts and amounts to little more than 15 or 20 minutes of viable material wrapped in people saying how wonderful the comic is. I wouldn't call it bad, rather pointless and the sort of thing that makes you wonder not only how the hell this is getting a theatrical release but how the hell this managed to play at as many film festivals as it has.

Essentially the film is the director's mash note to comic creator Bill Watterson. The film is filled with fans, experts and comic artists telling you how wonderful Calvin and Hobbes is and how it changed everything just as the medium was changing. Repeatedly we're told that this is the last great strip that comics has given us addng that it's last in the line of Krazy Kat, Little Nemo, Pogo, and Peanuts. There is NO context for this, there is very little explanation of those comics except to say they are the greats. We are also told that the reason the comic has survived is that Watterson's refusal to do products has made it something special.

You now know pretty much everything that is in the film and I've saved you 90 minutes of your life.

Lets start with the fact that while the film is filled with art- actually every Calvin and Hobbes comic is seen since they page through the complete Calvin and Hobbes-,most of the images are fleeting. We see panels, but outside of four or five complete strips, its all panels. Obviously its a rights issue, but at the same time we really should see what people are talking about not have it flash before us.

The film is much too in love with its subject. Everyone is in complete awe of Watterson, who remains entirely off screen. He is a private man and outside of some photos and self portraits we never see him.However everyone speaks as if his work is perfect and something a kin to a religious work. While I understand this is celebration of the man and his comic, I wish the director hadn't cut together everyone saying the same damn thing and it is the same thing over and over again. Its the fans saying how much the work means to them. Its the creators, lots of creators saying how he changed the medium all in almost exactly the same way.

I recently saw a film on making documentaries about art and one of the directors, I believe it was Ian Fischer who made the excellent RUDE DUDE on Steve Rude saying that when you get various people saying the same thing you have to cut it out because it becomes dull and boring. Director Joel Allen Schroeder doesn't know this and he lets the same statement be made so many times it stops meaning anything. Actually he could have gotten away with it if he some of the people interviewed actually explain why Calvin and Hobbes is great and a half hearted explanation of the art.

A huge problem is that director Joel Allen Schroeder is on screen for large portions of the film and he seems rather clueless. Looking like a grown up version of Calvin, but a bit more vacant, he wanders through various locations like a big kid who doesn't know what he's doing. He has one librarian give us a tour of her library.Why? I don't know. He marvels at the size of the paper that comics are drawn on.You didn't know that before? He has the camera film him as he looks lovingly at Watterson's comics (which we don't really see) with an expression on his face that makes him seem as though he was dropped a lot by his parents.

Schroeder genuinely doesn't seem to know comics and their history and if he does he makes no effort to explain them or how Calvin and Hobbes fits into it. Why is Krazy Kat important to Watterson? Because he did a piece on the comic? After seeing this film I couldn't say other than it has something to do with panel arrangement. Though having read Krazy Kat I suspect it's for other reasons. Nothing is really explained in an any sort of context.

Frankly if I sat you down with some of the other Unseen Films writers, Eden, John or Randi in particular for five minutes, just five minutes, you would be better educated on why and how Calvin and Hobbes is important from a historical perspective, and even an emotional one, than in all of the 90 minutes of this film.

To be honest many of the areas that the film goes into, say is comic art really art, would have been better had the film been better edited. Ideas run on and on when had they found someone who spoke clearly and to the point, they could have done it in a sentence or two.

It isn't all bad- actually if you chopped out the repetition and some of the stupider bits you'd probably have a great 30 minute movie.

There is this wonderful bit early in the film where a big black guy talks about being a 300 pound black kid living in a Latino part of town and going to an all white school and how he could relate to Calvin and his "I'm weird and that's the way I'm going to be" attitude that allowed him to survive being a kid. Why isn't there more of this? He's the only one who talks like that and the film is worse as a result.

Stephan Pastis of Pearls Before Swine and Berkeley Breathed of Bloom County show up a couple of times in the film and kick serious ass. Their discussion of merchandising in general and pertaining to Peanuts and Calvin and Hobbes is worth the price of admission. They are the only ones who speak sense and not platitudes or bullshit-I want to make a comics documentary just so I can talk to them.

I do like the quick look at the unauthorized comics, art and films since I didn't know some of them existed.

There is a brief but interesting discussion about the death of newspaper comics and the "atomization" of the medium across the digital world that needs a film unto itself.

There is also the talk of the final strip which manages to get things mostly right and put a tear in my eye.

Unfortunately the good bits are overwhelmed by the merely okay and the "you must be joking" ones.

Recommended only if you can see it for free and are a real fan or have a high tolerance for the mediocre.
Posted by Steve Kopian at November 12, 2013