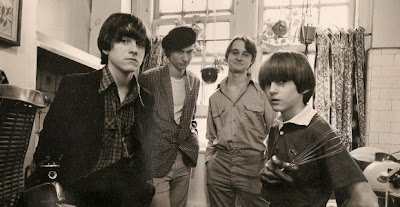 Miller Miller Miller and Sloan (or MMMS) was three brothers and one of their friends who formed a rock group and then tried to storm the gates of rock super stardom. Despite a large club following, and a few records the band imploded after about a decade and a hlf and the boys, now young men went their separate ways. WE DON”T WANNA MAKE YOU DANCE follows the boys from 1983 when the band seemed on the verge of super stardom, on to 1988 when they were still orbiting that star and then to the now with the group  scattered by their jobs and familial obligations. This is a funny touching look at creativity, stardom and how life and disappointment sometimes gets in the way of achieving that which we most desire.

Shot by the mother of one of the friends of MMMS, the film is a great deal of fun. Showing the boys as wild and crazy guys who are trying to entertain themselves as much of the rest of the world. Filled with performances, music videos and interviews the film makes you wonder why they never hit when other people did, was it ego? What it the refusal to tour? They’re never sure. All we know is that this is another case of talented musicians who couldn’t catch a break (Full disclosure- despite what the film indicates the group did meet with some success managing to open for the likes of Chaka Khan and The Clash. That information was intentionally withheld since it’s not what the film is about)

A kind of three part film covering 1983, 1988 and now, the best part of each section are the ones where the four guys are together kibitzing. As nice as each is alone, it’s when the four of them come together that the magic is revealed. Watching them pick on each other makes up some of the funniest moments I’ve seen on film all year. When the we see them alone, especially in the present the film is slightly less compelling.

The music of MMMS is quite good. The boys bubbly catchy pop/funk/hip hop mixes are thoroughly enjoyable and the sort of things that should have made them rich. Strangely though if you’re like me you won’t realize just how good the songs are until the end of the film comes and the guys play together for the first time in 16 years. There is something about their older selves, now better musicians, playing their poppy sings that gives the songs a weight and an intensity that in retrospect seemed lacking. By the time the film ends you’ll be hoping for a reunion. (At the end of the Q&A one of the brothers said that a reunion concert is being contemplated- I’m game and ready to go.)

This is fun film. The film was world premiered at DOC NYC and there was talk of the DVD and its copious extras and VOD release at the screening, but to be honest that’s selling the film short. Sure the DVDs and VOD will be coming but this is a film that deserves to be seen on the big screen. There is something about sitting in a darkened room with a bunch of strangers that makes this film special. I know if I had seen this film small I would have liked it less, but being able to interact with it and the people around me like the brothers on screen made is something more.

See this film
Posted by Steve Kopian at November 20, 2013