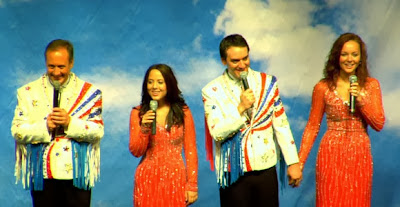 Portrait of several of the performers living around and performing in Branson Missouri. we look at the Lennon family, The Presley family and the group of people who are performing in the Great American Variety Show. Its a look at how the city has changed over the years through the families and performers.

I really don't know what to say, this is a slice of life documentary that follows the various people over a couple of years. We watch as the economic down turn takes its toll on the shows and the town. Its some good time with some good people. Its the sort of film that would probably be great on PBS (though the F-bombs would not be welcome)

If the film has any flaw it's that the running time is much too long. Running almost two hours the film comes very close to wearing out it's welcome. I suspect this is the result of the film seeming kind of free form during the early part of it and it then taking shape or direction in the second half where it finds footing by focusing on the mayor and towns troubles and a gay man and his family. I think if things had been more focused earlier it would have been a great film instead of a really good one.

Worth seeing if you get the chance.
Posted by Steve Kopian at November 16, 2013