Remembering Playland by the Beach 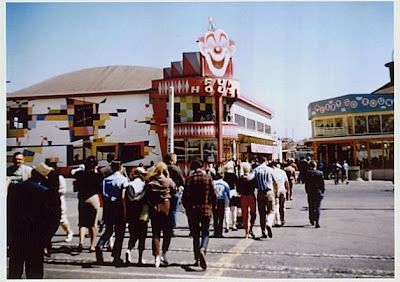 I did not grow up in San Francisco. Let me take it farther, I’ve never been to California, hell I’ve never been farther west than the western edge of Pennsylvania, but I had heard of Playland on the Beach. I had heard at one time it was the Coney Island of the West. Never having been there, and with the park having been demolished some 40 years ago there was no way to know if it was true, but that’s what I had heard. However seeing November Fire Films Remembering Playland by the Beach it’s a good bet that the park probably was close to Coney back in it its hay day.

More a memory film than straight documentary this hour long film looks back at the history of the park from its days as concession stands on the beach to importing of rides to the building of the complex. It covers the various rides including ever changing roller coasters and the ability to spend whole days in the fun house for the nominal entry fee. They discuss the myths and legends and truth contained therein (such as the story of the guy who stood up on the rollercoaster and lost his head). We also get a great sense of what it was like to live near the park as well as what it was like to work there.

I was never at the park but after seeing this I wish I had been there. This is a great shot of instant nostalgia even for someone who was never there.
Posted by Steve Kopian at November 05, 2013