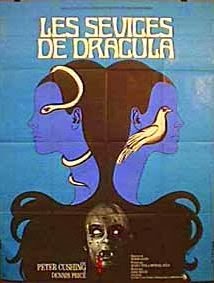 I have a general rule that any Hammer film is better than no Hammer films. The rule has a list of exceptions for specific titles, but for the most part I’d rather watch any of the Hammer Horror films out there then most other horror films, especially if Christopher Lee or Peter Cushing is in them. Yes some are better than others but all are the cinematic equivalent of comfort food for me.

Twins of Evil is one of the lesser Hammer films for me. I like it, I’m hoping to see it when it runs at Scary Movies this weekend, but it’s not one of the best, however it’s still worth seeing.

The plot has two beautiful blonde twins going to live with their uncle (Cushing) who is the head of an order trying to wipe out a vampires. They are battling the evil Count Karnstein the main vampire in the area. The count is taken with the twins and one of the twins is taken with the count. Cushing isn’t happy.

Allowing that the plot is run of the mill as far as the Hammer vampire films go, it’s a Van Helsing character fighting a Dracula character, the film is pretty good. It doesn’t have many surprises but it does what it does very well. Basically if you’ve seen any of the other Hammer vampire films you know what to expect.

The problem with the film is that in trying to spice up the formula they derail the film. While the idea of beautiful twins as lust objects is keeping with the Hammer shift from blood to sex is a good one, the problem is that Mary and Madeline Collinson are not really that good at acting. Sure they look good, but once they open their mouths they just seem out of their depth. They aren’t horrible, but they aren’t up to anyone else around them.

While I’m not one of my favorite Hammer films, it’s still good, and if you’ve never seen a Hammer horror on a big screen you are ordered to get to Lincoln Center to see this when it runs this tomorrow  as part of Scary Movies 7.
Posted by Steve Kopian at November 02, 2013