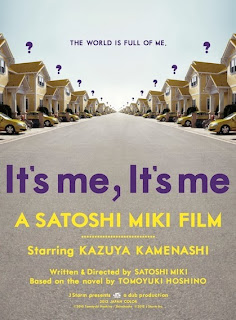 When Hitoshi steals another person's cellphone he some how manages to cause duplicate versions of himself to appear, or is it that everyone begins to look like him.... Chaos soon ensues as all of the various Hitoshi's are running around and running amok.

Its Me Its Me played earlier this year during the brief cross over period when the New York Asian Film Festival and Japan Cuts were essentially one festival. At that time Mondocurry took a look at the film and found it to be quirky and unique but little more than that (his take can be found here). With the film getting a theatrical release in the US I was given a chance to see the film and week before Halloween I hunkered down and took a look.

I have no idea what to say. I mean that in a good way and a bad way.

Playing like a Spike Jonze or Michel Gondry film on acid this film is the sort of off the wall strange film that the Japanese do so well.  A weird meditation on self, perception, reality and a few other things this is an occasionally heady film that is  frequently just damn weird. There is something about all of the Hitoshis running around that is both really cool on a technical level but really strange on an emotional level. Its the sort of thing that some part of your brain just says is wrong.

I know the film is not what many people expected. Hitoshi is played by popstar Kazuya Kamenashi, and when the film played at the Japan Society this summer it brought a huge number of his fans to the screening. Reports from various people at the screening had many of the young women staring at the screen unsure of what they were seeing. Their initial love of the film and its star getting a bit tapped down as the film went on.

My reaction to the film is some what close Mondocurry's in that I know that this film is truly something unique, but it's not something that I can easily connect to.  My over riding reaction to the film was I have to see this again. I don't mean that in a bad way, rather it's the sort of film that requires you go with it without reservation and without preconceived notions. The talk off and on over the last three or four months about the film has made it difficult for me not to go in without some thought about the film- it was something that proved kind of deadly since I kept expecting it to be something else. It wasn't so now I'm left wanting to see the film again so that I can take it on it's own terms.

Should you see the film? If you want to see something really different from most films yes you should. Clear your mind, clear your expectations and give the film a shot. I have no idea if you'll like it, hell I'm not sure I like it, but I know that at the same time I've seen something unique and special and worth the effort to see it.

The film opens Friday and any true cinema fan worth their salt will make an effort to see it.