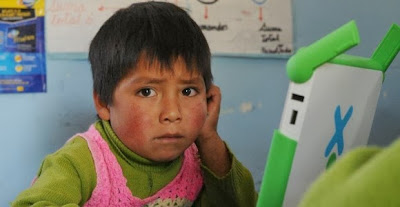 Slick documentary on the One Laptop per Child program which give kids in out of the way places, in this case Peru, and how that changes their lives. The film also has interviews with various members of the Internet intelligentsia  who are shaping the way we think and use the computers and the internet.

Good but much too rah rah and slick for my tastes film shows very clearly how the introduction of computers is changing the world. Seemingly designed to be seen on a computer, with lots of little clips from Google, You Tube and else where the film has the feel of PowerPoint presentation come to life. Actually it has the feel of a too long recruiting film or PSA with its wonder of it all attitude leaning heavily into the overly sweet territory.

I'm not going to lie  and say otherwise, but I was largely done about twenty minutes into the film. I stayed to the bitter end but I don't think I really needed to. There is a great film in there but the film needs to lose some of the redundant shots of kids leaning over the laptops and talk about the interconnectedness of it all.

Ita good film, but a little goes a long way.