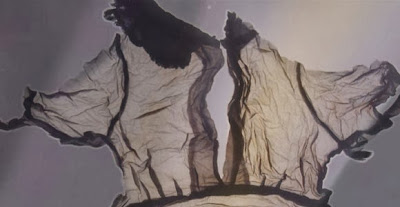 Let me not point too fine a point on it, Thing Left Behind is the best film I’ve seen in 2013.

I’m very serious about that.

While you may be able to argue about various points, never, has any film, even the classic Grave of Fireflies, ever reduced the tragedy of Hiroshima down to one person, to one moment of loss, and then repeated it with each person in its gaze. What director Linda Hoaglund and hers subject Ishiuchi Miyako have done is simply to take the weight of history and one huge event and made it personal.

The film follows photographer Ishiuchi as she prepares her photos of the things left behind after the bombing of Hiroshima for a show in Vancouver Canada. The project grew out of a project she did photographing the things that her own mother left behind. We watch as she returns to the Hiroshima museum to photograph new donations. We then watch as the photos are sent to Canada and are set up and as the public interacts with the photos.

It sounds simple. And it is, but there is something about seeing the photos and seeing the objects over the course of the film that makes them come alive. By the time film ends the objects aren’t just random objects but things that we carry with us. They are things we have come to know, to ponder. They are part of our lives. They are objects that we think we know, since we and the people in the film have been pondering the stories and we’ve some how made them safe. By the time the film ends and we are told their real story, the people who left these objects behind have become friends of sort, so watching the final moments, listening to the stories of the people no longer with us is devastating.

It destroyed me. I was openly sobbing as the end credits rolled. These people who died some 20 years or more before I was born were now friends, and they were lost and their loss was something I felt over and over. How could this happen to my friends?

Tragedy is more affecting on a small scale. We can deal with events on the small scales and be effected by single individuals. Large scale events, Hiroshima, Fukushima some other large scale disaster means less to us emotionally. They are too big to fathom. We forget that the big events are not masses of faceless people, rather its just a large number of individuals. If we could see them on that small scale then they touch us more. Hoagland’s film is about that small scale. By making the events in August 1945 about one person at a time we are brought into events in a way that makes it truly understandable.

Of course at the center of the film are Ishiuchi's  photos. Taking objects, many long buried in the archives of the Hiroshima museum, she gives a sense of human scale to it all. Fragments of dresses, a kimono, socks, broken glasses a child’s doll, all shot in natural light come back to life before her lens.

There is this wonderfully weird moment where a doll in a glass case is brought out to be photographed. Inside the case the doll seems to be pained and un happy. However as its removed the doll seems to change in demeanor. A smile appears on the face the eyes sparkle. Its seems that the toy is alive. The kicker is the moment when Ishiuchi and the museum curator look at the doll and realize that the feet had never been unwrapped by the owner- so they unwrap the feet. Looking at the doll after the feet are unwrapped and revealed in all their glory the doll seems positively alive. Of course it’s a trick of the light…or perhaps not, perhaps the ghosts of those long gone have returned to smile at not being forgotten. My reaction to seeing it was to go Oh Cool. (At the Q&A that followed the DOC NYC screening Hoaglund said that many of the objects do not look as good or affecting as they do in the photographs. There is something in the way that Ishiuchi positions the pieces that brings them to life.)

I cannot recommend this film enough.

I was moved to somewhere beyond words.

A brilliant anti-war film that should be seen by everyone.